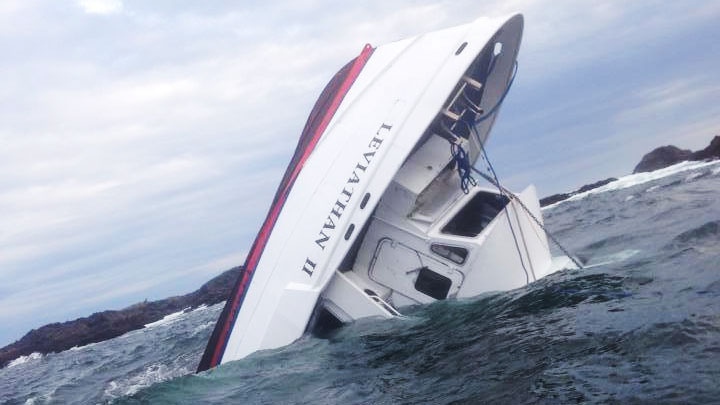 VANCOUVER -- The deadly capsizing of a whale-watching vessel off Vancouver Island last year was an "act of God" that could not have been reasonably predicted nor prevented, says the owner of a tour operator.

The German siblings were aboard the Leviathan II on Oct. 25, 2015, when the 20-metre vessel flipped, killing six people. They are accusing the company of negligence for allowing the Leviathan II out in treacherous ocean conditions.

The response to a civil claim praised Capt. Wayne Dolby, who is also named in the lawsuit, as well as other employees, for their life-saving actions.

"The captain and crew successfully pulled a number of passengers into the life raft and were attempting to rescue other passengers when vessels, which saw the deployed parachute rocket, and then the Canadian Coast Guard vessel, attended to provide rescue services," says the document filed in B.C. Supreme Court.

It describes the Leviathan II as properly equipped and certified by Transport Canada, as well as complying with regulations regarding life-jackets and the distribution of passengers around the sightseeing craft.

"The capsize occurred through a combination of sea conditions, wind and waves generated naturally in such a manner as to be unforeseeable and not preventable by exercise of ordinary care, caution and maritime skill," the document says.

"Injury, loss, damage or expense was caused by an act of God, was totally accidental and/or unforeseeable in nature, or was caused or contributed by the negligence of others not presently known."

None of the allegations have been tested in court.

One Australian and five Britons died after the Leviathan II overturned with 24 passengers and three crew on board. The craft had a 46-person capacity.

The Transportation Safety Board is conducting an investigation to determine what caused the vessel to capsize.

The Barchfeld brothers, who were vacationing in Canada, are seeking compensation for alleged physical and psychological injuries.

Five legal actions have already been filed in Federal Court involving 34 people in relation to the Leviathan II, says the response to civil claim.

The tour operator argues in the document that the lawsuit should not be granted class-action status and that the action would be better heard in Federal Court so the question of liability can be answered alongside five preceding suits.

The court document says that if any injury or loss was suffered, the blame lies with the case plaintiffs for not taking proper steps to mitigate any damage. That includes failing to seek or follow medical advice and failing to resume employment as soon as possible.