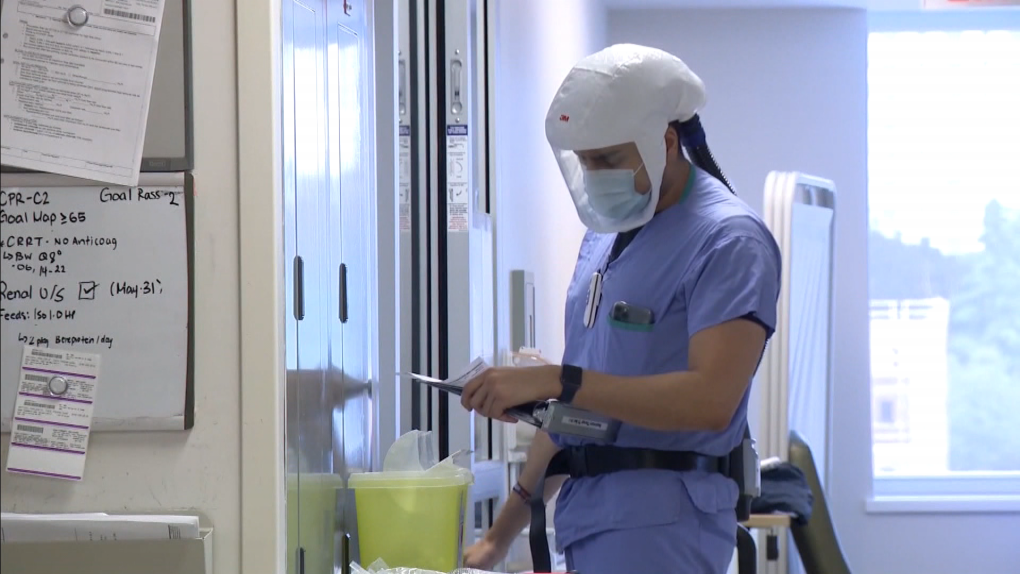 A health-care worker in personal protective equipment is seen in the Surrey Memorial Hospital COVID-19 intensive care unit on June 5, 2021.

There are more than 1,000 patients in B.C. hospitals with COVID-19, the Ministry of Health announced Monday, setting a new all-time record for the province.

The total number of test-positive patients in hospital increased to 1,048 over the weekend, up from 990 on Friday. That includes both patients whose COVID-19 infections are serious enough to merit hospitalization and those who were hospitalized for some other reason and tested positive incidentally.

The number of COVID-19 patients in intensive care decreased slightly to 138 over the same period.

Officials also announced 19 new deaths related to the disease, bringing B.C.'s death toll to 2,616 since the start of the pandemic. The province's seven-day average for coronavirus deaths has decreased to nine per day, after reaching a one-year high of 10 per day last week.

The ministry doesn't release the vaccination status of people who die from COVID-19 complications on a daily basis.

On Friday, provincial health officer Dr. Bonnie Henry revealed about 40 per cent of the COVID-19 deaths recorded this month have involved seniors in care.

"Most of the people who are dying outside of those outbreaks are older people with underlying illnesses. A high proportion of them are people who don't have the protection from vaccination," she said.

Another 4,075 cases of COVID-19 were confirmed over the weekend as well, mostly through PCR testing, though daily infection numbers have carried less weight since officials started discouraging most healthy people from getting tested.

Taken at face value, the weekend's cases put the province's seven-day average for infections at 1,682 per day, the lowest it's been since Christmas Eve.

Health officials have said they believe the peak of the Omicron wave has passed, citing test-positivity and wastewater testing.