B.C.'s rent freeze may be extended to the end of the year 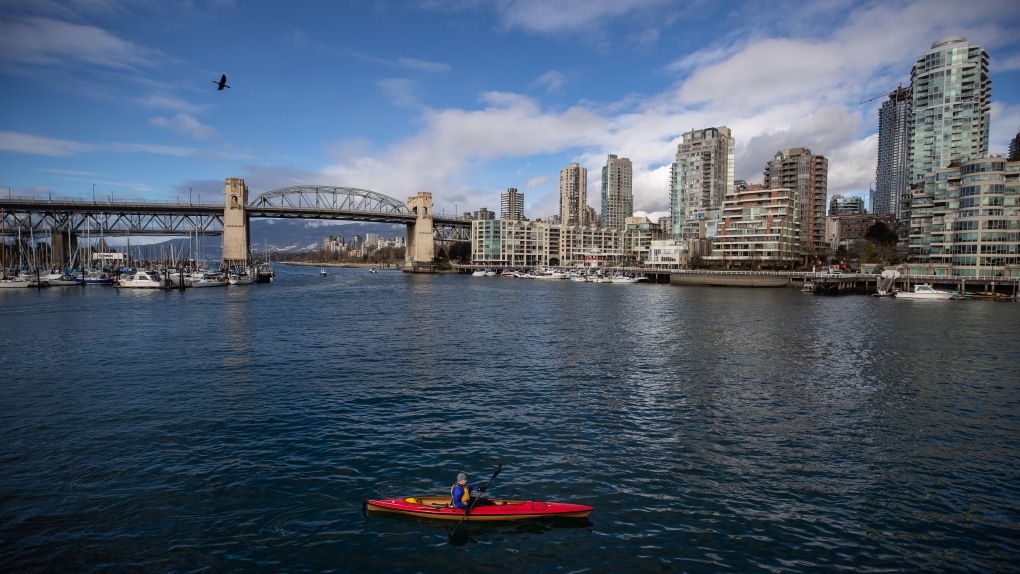 A man paddles a kayak on False Creek as the Burrard Bridge and condo towers are seen in the distance, in Vancouver, on Tuesday, Feb. 16, 2021. (Darryl Dyck / THE CANADIAN PRESS)

VANCOUVER -- A rent freeze put in place in British Columbia to protect those who'd lost their jobs during the pandemic may be extended to the end of 2021.

The proposal from the NDP government suggests an extension as part of a series of legislative changes that also tackle rent increases and certain evictions.

Proposed legislative changes would see the freeze introduced last year and already extended once stretched out until Dec. 31.

If approved, this would mean renters who were warned of an increase that was supposed to take effect after March 30 won't actually be paying more until 2022.

MLA Spencer Chandra Herbert said Monday the changes would also cap future rent increases to inflation, starting when the rent freeze is over.

The maximum allowable rental increase, which is set by the province each year, has been much higher in years past.

Additionally, he said in a statement on behalf of Attorney General and Minister for Responsible Housing David Eby, the proposed amendments would stop illegal renovictions – the process of forcing tenants out by claiming a property will be renovated, then finding new tenants willing to pay more.

Under the new rules, landlords would have to apply to the province's Residential Tenancy Branch before kicking out their tenants. If the renovation is deemed unsubstantial, or if the RTB feels the work doesn't require the unit to be vacant, landlords would not be able to end their renters' lease.

"The changes mean no more tenants will face eviction notices for phoney renovations that were never going to happen," the MLA for Vancouver West End said.

"By putting an end to this kind of bullying behaviour, meant to drive out long-term tenants and jack up the rent, we're protecting renters and supporting rental housing providers who do proactive maintenance of their rental homes."

If the new rules on renovictions are passed, they'd come into effect in July.

The update follows several recent reports on rent in B.C., and in particular, in Metro Vancouver.

Earlier this year, an annual review from the Canada Mortgage and Housing Corporation said the region's vacancy rate has increased to 2.6 per cent – the highest the region has seen in more than a decade.

The change in market during the pandemic means landlords have been offering incentives to attract new renters, a trend experts expect to continue through 2021.

However, a CMHC analyst said it's worth noting that new renters are still paying much more than those who've been in their homes for some time. The average asking price on new listings is 21.4 per cent higher than the average rent for already-occupied units.

Incentives may help a new tenant trying to make ends meet, but they're often being offered up instead of a decrease in rent, so that long-term, landlords are still making more money.