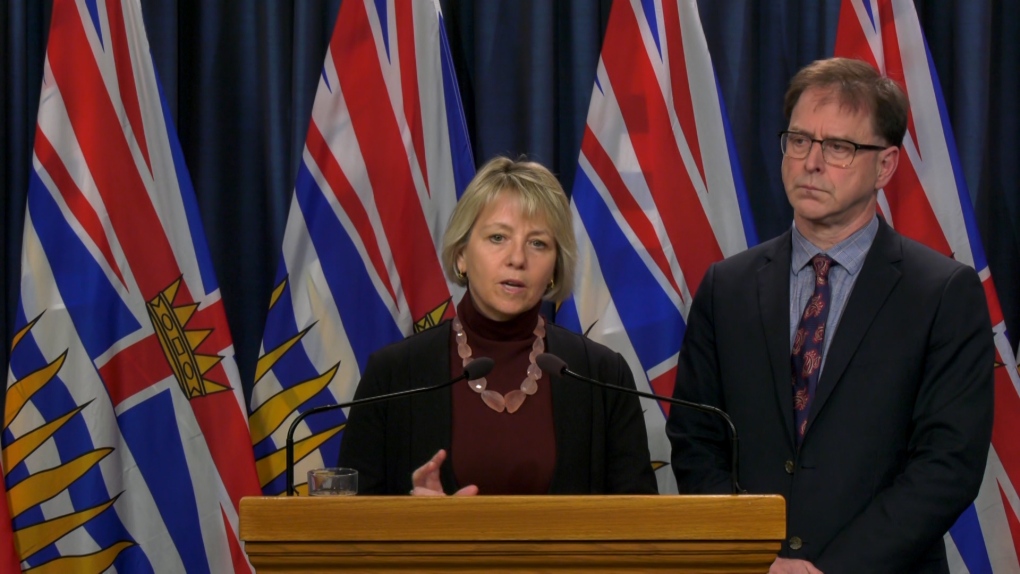 Minister of Health Adrian Dix and Provincial Health Officer Dr. Bonnie Henry announced the case to reporters at the provincial legislature a day earlier than their regularly scheduled update on the virus. (CTV)

The case is a "presumptive positive" and a sample has been sent to the National Microbiology Lab in Winnipeg for confirmation.

Minister of Health Adrian Dix and Provincial Health Officer Dr. Bonnie Henry announced the case to reporters at the provincial legislature a day earlier than their regularly scheduled update on the virus.

The case is a woman in her 30s who resides in the Fraser Health region, Henry said. The woman recently returned from travel to Iran and has a milder form of the disease, Henry said.

The province's top doctor said Fraser Health has already begun investigating the woman's close contacts and placed a number of the people she's been in close proximity to in isolation.

"We'll be doing a detailed investigation of her travel, when her symptoms started, and determine whether we need to investigate or notify people who were on the aircraft she returned in," Henry said.

The new case brings the total number recorded in British Columbia to six. On Wednesday, the province announced that the first person in B.C. to contract the virus had recovered.

Henry said the provincial government still believes the risk to British Columbians from the COVID-19 is low.

"I think this reflects that we have a very robust system for picking up people who may have this virus," Henry said. "This one, clearly, is a bit unusual in that the travel to Iran is something new."

Iran recently began reporting cases of the virus, Henry said. She said provincial health officials will be working with Canadian and international health organizations to determine where the woman contracted the virus.