B.C. referendum explainer: A quick look at the 3 options

B.C.'s referendum on proportional representation could change the way people vote, and dramatically alter how the winners win.

As voters face an important decision, CTV News looks at the three options on the ballot and how they might have influenced the outcome of past elections.

For those who do want to deviate from first past the post, here's a quick summary of the other choices.

At first, it works just like the current system – voters put an "X" or fill in a box next to their preferred regional candidate, then whoever gets the most votes goes to Victoria.

The difference is voters could end up having two votes, one for the candidate and one for the party. If MMP is chosen in the fall referendum, a legislative committee will decide whether voters will choose the party separately, or if their candidate vote will also count for that person's party.

The parties with the most votes get to send other candidates to Victoria.

When the election is over, at least 60 per cent of MLAs will represent their electoral district, but others placed on a party list will be brought in so the proportion of votes and seats match.

Here's a look at how the 2013 provincial election might have looked under proportional representation. The Liberal majority is gone, and the Greens' presence is up significantly. 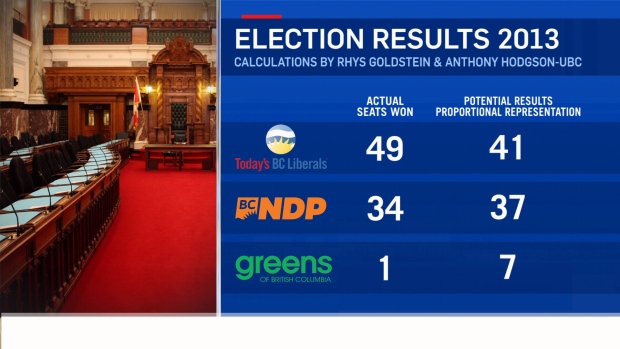 The next option is a bit more of a change from the current system. Voters would still have one vote for their favourite local candidate, and whoever got the most votes would be elected.

But with DMP, parties have the option to have a secondary candidate listed under their primary choice.

For those that put forward two names, voters mark the ballot once to support both.

DMP is a system recently developed in Canada and is not currently in use.

The primary candidate is elected by winning the majority of votes, but when it comes to the secondary, Elections BC would factor in the popular vote.

Second seats go to parties so that each party's share of seats roughly matches its province-wide popular vote. Parties need at least five per cent to get any second seats.

When looking at the 2017 election, for example, the NDP and Liberals still could have been close, but the Greens might have had as many as five times more seats. 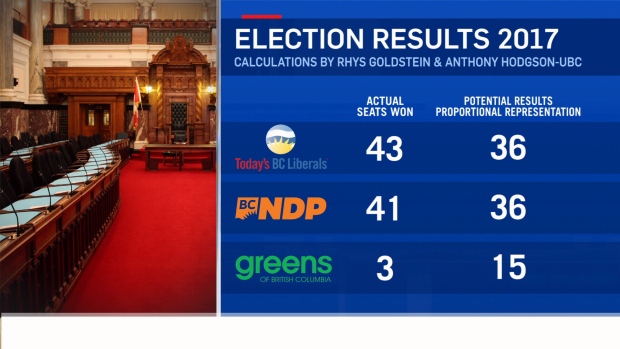 The third option for those looking for change is called rural-urban proportional.

In rural areas, the system reverts to MMP, but urban voters would do something completely new.

Voters in B.C. cities would choose their favourite candidates by ranking as many as they want – first, second, and so on – and if a candidate gets enough first place votes, they're elected.

If not, Elections BC counts again, knocking off whoever has the fewest votes. Instead, officials look to those voters' next choices and runs the count again.

This process continues until all seats are filled,

Each district has a minimum number of votes needed to win a single seat, varying based on a few factors.

Under this system, parties can run as many candidates in a district as there are seats.

In 2001, the NDP was almost wiped out by voters, and the Green Party had no seats. Had there been a RUP system in effect at the time, the Liberals likely still would have won, but the Greens could have had 11 seats and the NDP 18. 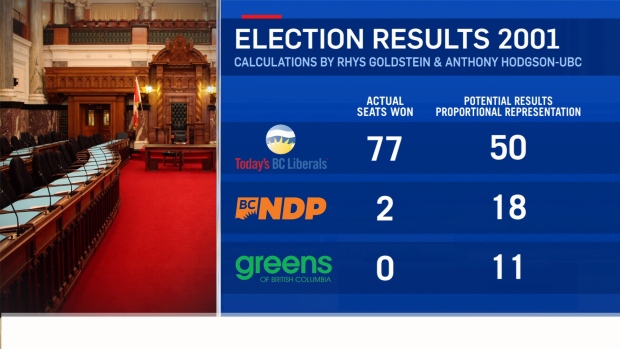 The new systems are designed to reflect the popular vote, and could mean dramatically different outcomes in future elections, but critics argue they aren't as simple as what we have now.

Elections BC began the mailing of ballots last week, and will continue sending them to registered voters across the province until Nov. 2. Voters have until midnight on Nov. 23 to request a ballot if they haven't received one, and Elections BC must have received them back by 4:30 p.m. on Nov. 30.

Eligible voters are Canadian citizens aged 18 or older as of Nov. 30, and have resided in B.C. for at least six months before the end of next month.