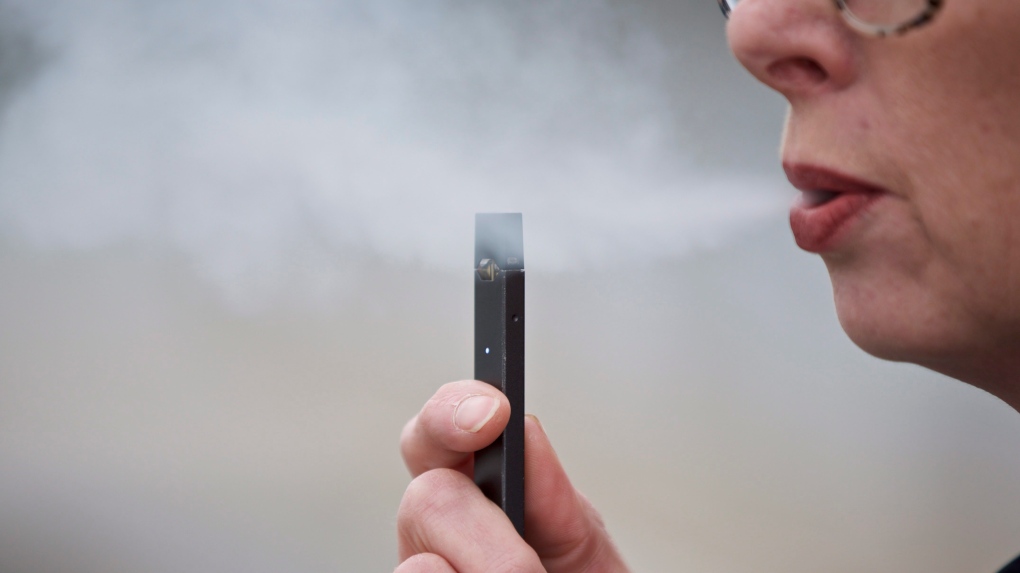 A woman exhales a puff of vapor from a Juul pen in Vancouver, Wash., Tuesday, April 16, 2019. (AP Photo/Craig Mitchelldyer)

In a notice of civil claim filed Monday with the Supreme Court of British Columbia, Jaycen Stephens and Owen Mann-Campbell say those health conditions include pulmonary disease.

The claim accuses Juul Labs Canada of Vancouver and San Francisco-based Juul Labs Inc. of “misleading and/or deceptive statements,” including implying that vaping is safer than smoking and marketing the product to minors.

It also accuses Juul of “downplaying, misrepresenting or under-reporting serious side effects and harmful complications” of using its e-cigarettes.

The allegations have not been tested in court and a statement of defence has not been filed.

In an email, Lisa Hutniak of Juul Labs Canada says the company has not been served with the lawsuit and is not able to comment.

The statement of claim alleges that individuals who have used e-cigarettes, including those manufactured and distributed by Juul, have reported experiencing shortness of breath, chest pain, pneumonia, vocal loss and other conditions.

“The plaintiffs bring this action against the defendants, and each of them, based on their manufacturing of e-cigarettes, their disregard to the harmful effects of using their products, and their failure to adequately warn consumers of the risks associated with their products,” the civil claim alleges.

The document says the plaintiffs are also seeking the certification of the lawsuit as a class-action on behalf of those who have purchased and used Juul e-cigarettes.

In addition to personal damages, the suit says the plaintiffs and class-action members have a claim for the recovery of health care costs incurred on their behalf by British Columbia's Ministry of Health and other provincial and territorial governments.

The notice of civil claim says both men were 18 and minors when they began using e-cigarettes.

The claim says Stephens, who did not smoke cigarettes before 2018, has experienced shortness of breath, chronic bronchitis, chest pain, coughing, pneumonia, increased addiction to nicotine and anxiety. It says he was advised by a family doctor this year “that his symptoms were likely related to vaping.”

He would not have purchased or used Juul e-cigarettes had he been provided with accurate information or warnings with respect to possible health complications from vaping, the claim says.

Mann-Campbell started vaping due to public representations that e-cigarettes were “safe and a healthier alternative to smoking,” the suit alleges.

He has experienced shortness of breath, chest pain, coughing, increased addiction to nicotine, anxiety, depression and weight loss, it says, and was advised by a family doctor to stop using e-cigarettes. Mann-Campbell suffers permanent physical disability, loss of earnings and “income earning capacity,” it says.