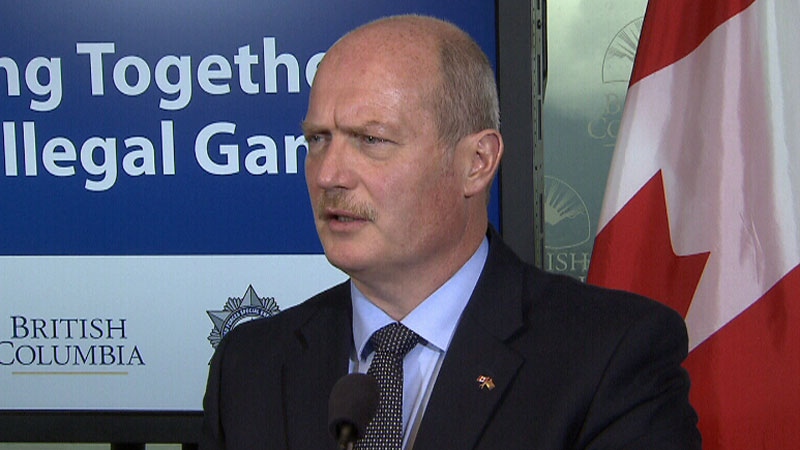 VANCOUVER - British Columbia is attempting to crack down on money laundering at casinos with help from the province's anti-gang police agency and strategies that encourage gamblers to come without a wad of cash.

Finance Minister Mike de Jong said 22 officers with the Combined Forces Special Enforcement Unit will eventually be dedicated to investigating groups that use gaming facilities to legalize proceeds of crime.

He said Monday that police will work with the B.C. Lottery Corp. and the Gaming Policy Enforcement Branch as part of the Illegal Gaming Investigation Team.

“British Columbians that attend our casino and gaming establishments do so in the knowledge that they are participating in a lawful form of entertainment. They want to know and deserve to know that the people sitting at the tables with them are doing so on the same basis.”

A provincially funded RCMP team that targeted illegal gaming in B.C. was disbanded in 2009.

De Jong said suspicious currency transactions of $20.7 million last July led in part to the creation of a new unit, which will get 30 per cent of its funding from the federal government through the RCMP.

Government figures show that was the highest transaction between April 2015, when $11.8 million in dubious activity was recorded, and March 2016, when the figure was $7.3 million.

He said the government's anti-money laundering strategy involves developing and promoting the use of cash alternatives at gaming facilities.

“We're at a point now where it isn't really necessary for people to enter casinos with vast sums of cash,” he said. “Operators will tell you that there is still, in some cultures, the propensity to do so.”

Other strategies include restricting patrons from exchanging small bills for large currency denominations and temporarily banning people from establishments while they are being investigated.

“It's going to make a dent,” he said. “These folks are going to feel the brunt of this organization.”

Morris said the province's civil forfeiture program stands to benefit as proceeds of crime are seized and money is funnelled into crime prevention strategies.