B.C. ferry was travelling at higher-than-recommended speeds before hitting terminal: safety board 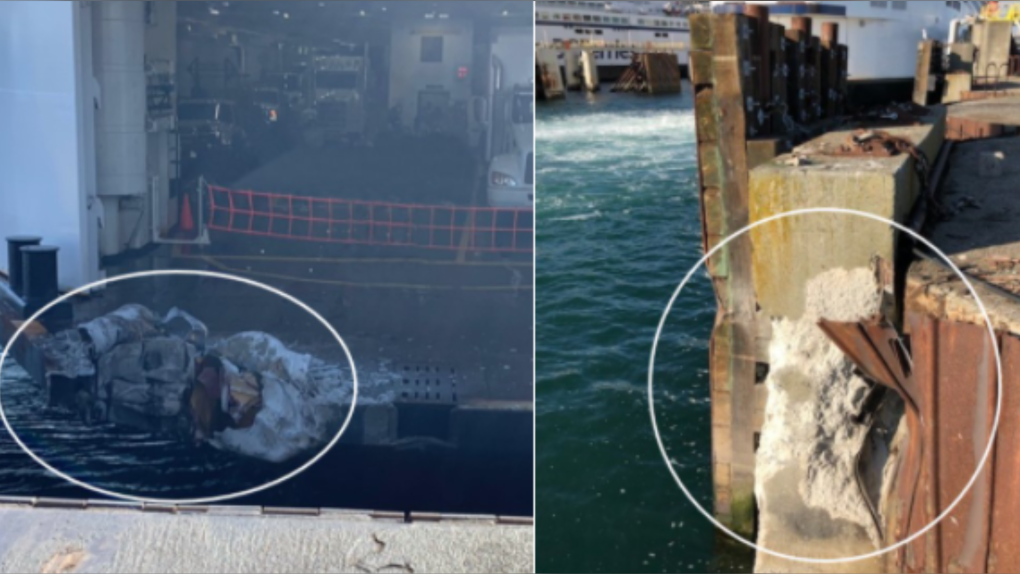 A Transportation Safety Board report shows the damage to the vessel and terminal from the incident on April 18, 2020. (TSB)

RICHMOND, B.C. -- An investigation of a B.C. ferry hitting a dock last spring found the vessel was travelling at speeds higher than recommended and the ship failed to respond when the crew tried to prevent the crash.

A Transportation Safety Board report released Thursday said when the master of the Spirit of Vancouver Island ordered the helmsman to steer hard to avoid the crash, the ferry didn't respond.

In the final moments before the crash, the master ordered both anchors released, but neither did and it was later determined an issue with overtightening the anchor brakes may have affected their operation.

The report doesn't say why the ship didn't respond to efforts to prevent the hard hit as it came into the Tsawwassen terminal last April, although it says bridge teams must stick to recommended speeds because high speeds can reduce the time to respond to a lack of control.

A little more than two minutes before ferry struck its berth, the report says the ship's master continued to approach the terminal “with all machinery components operating satisfactorily,” only to see the ferry moving in opposite direction to what was expected moments later.

Passengers weren't warned about the impending strike, and two crew members and one passenger reported minor injuries the next day.

The safety board says BC Ferries enacted a number of safety measures after the incident, including updates to the vessel's manual, a re-creation of the incident in a simulator and drills for crew members.

The ferry underwent a “mid-life upgrade” in 2019, the report says, including the renewal of propulsion components and installation of new machinery control, navigation, communication and safety evacuation systems.