B.C. crafters and makers organize to make masks, face shields and even ventilators 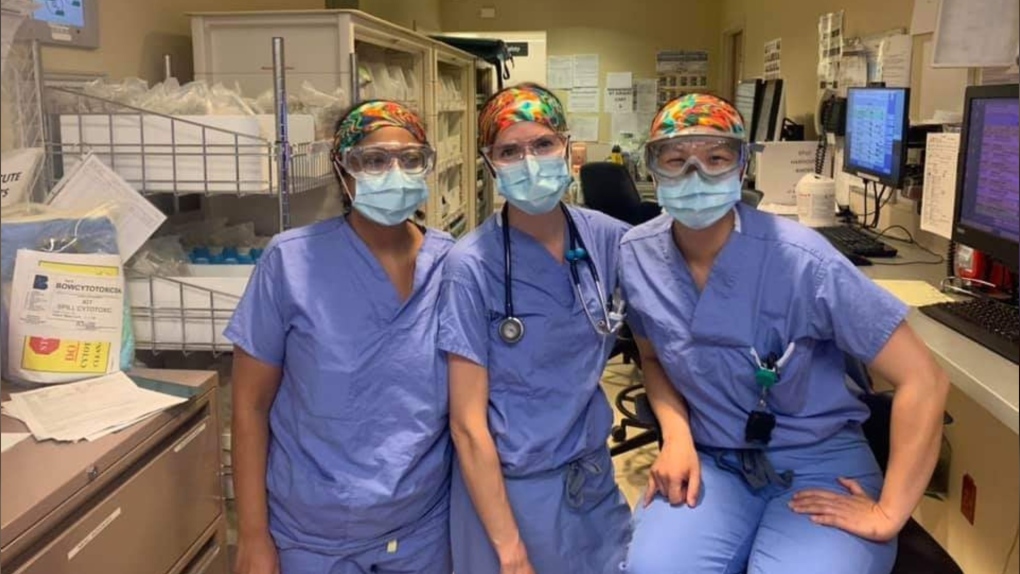 VANCOUVER -- Over the past few weeks, a small army of B.C. sewers and other makers have been meeting in Facebook groups to show off mask-making techniques and set up an informal distribution system in an attempt to fortify the province’s dwindling supply of personal protective equipment.

A doctor who is one of the founders of a Facebook group called Vancouver Makers for Emergency Response & Support says the need is real as health-care workers battle COVID-19, a highly infectious viral illness that has prompted unprecedented containment measures around the world.

But crafty residents should think about who they’re making items for and should consider joining an established group to make sure what they’re making is safe and useful, said Dr. Sean Wormsbecker.

“The kind of volume of use we’re seeing right now with PPE (personal protective equipment) is kind of unprecedented for us,” said Wormsbecker, who works in two hospitals in the Fraser Health region: Royal Columbian and Eagle Ridge.

“We’re going through the amount in a day that would have lasted several days, simply because we’re having to keep ourselves protected at all times.”

Wormsbecker’s group is focused on organizing a wide range of makers, from sewers who have been asked to make headbands with buttons that make wearing surgical masks less onerous for nurses, to 3-D printer hobbyists who can make mask-holding brackets that go around the back of the head.

Then, there are more ambitious projects involving engineers and designers: groups that are working on building UVC sterilizing chambers (using ultra-violet rays that can sterilize viral particles), looking at designs to make ventilators work for more than one patient, or making standalone ventilators.

Another project that Vancouver General Hospital is involved with is building clear plastic chambers that will help to safely intubate patients who have COVID-19, Wormsbecker said.

“When we put a breathing tube into a patient, it potentially aerosolizes particles of the virus essentially contaminating an entire room, covering everyone with the virus,” he said.

“By having an enclosed box around the patient with arm holes, almost like an incubator chamber, it allows us to minimize that.”

A lot of effort is also going into ramping up small-scale production of plastic face shields, potentially by companies that have manufacturing capacity in the Lower Mainland, Wormsbecker said.

“The face shields are relatively simple, and can be done on smaller scale laser cutters,” he said.

“A lot of shops in the Lower Mainland have laser cutting machines that are $5,000 or $10,000 machines, but all you have to do is have the right design and you can feed the sheets of plastic in to make the face shields.”

Kali Readwin, another member of the group, said they are trying to organize with other groups to make sure efforts aren’t duplicated and supplies aren’t wasted by designs someone may have pulled off the Internet, but are actually flawed.

As for why a doctor is spending time working on setting up a small-scale manufacturing network in the middle of a pandemic, Wormsbecker said suppliers to hospital haven’t been meeting the huge need for PPE.

“And we don’t have a clear sense of when those needs are going to be met,” he added.

Should you make cloth masks?

But Readwin said they could be useful to give to people who are not on the front lines of the COVID-19 battle: for instance, veterinary clinics or cleaners. That could free up medical-grade masks for frontline healthcare workers.

“We’re trying to reach out to all of the (Facebook) groups that are sewing masks to collaborate with them and reach out to any other places that might be able to use a fabric mask, where it’s not a COVID-related use,” Readwin said.

Wormsbecker and Readwin suggested instead of pulling a pattern off the Internet and getting started by yourself, to first reach out to an established group and get connected to see what they need.

Should you wear a mask?

Wormsbecker warned against wearing a mask if you haven’t been properly trained on putting it on, how to remove it safely and how to clean and store it.

You don’t need to wear a mask to go to the grocery store, for instance — and wearing one could actually be more harmful than washing your hands for 20 seconds with soap, not touching your face, and staying home as much as possible.

“If I have someone who has COVID and they are wearing a face mask and coughing into it but is adjusting it over their nose every two minutes, they’re now touching a contaminated filter and they’re touching surfaces,” Wormsbecker said. Many people think it’s OK to touch the outside of the mask they’re wearing — it’s not, Wormsbecker emphasized.

“Doing the socially distant thing and coughing into your elbow sometimes is more effective than the false sense of security of a mask,” he said.

'It's COVID plus': B.C.'s pandemic death toll under renewed scrutiny