B.C. city approves bylaw that would fine people for sleeping on sidewalks 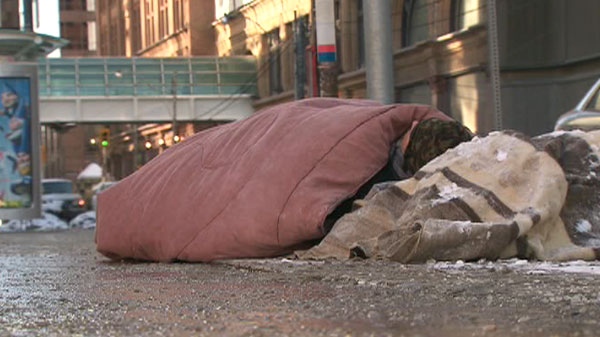 A homeless man seeks warmth under blankets on a Toronto sidewalk during a cold snap Sunday, Jan. 23, 2011.

A B.C. city has adopted new amendments to a bylaw banning people from lying or sitting down on city streets.

Penticton City Council voted Tuesday night to approve amendments to its Good Neighbour bylaw that stops people from sitting or lying down on sections of the downtown core.

The amendments will also stop people from gathering outside vacant stores, and will be in effect every year between May and the end of September. Violators could face a $100 fine.

"This has to do with the safety of our community and that's very important to me," Mayor John Vassilaki said to council. "That's what this is all about. It's about safety."

In a presentation to council, city staff said the amendment addresses a "current reality of what community is facing."

It's not the first time a bylaw has targeted people sleeping on the street in the Okanagan.

The City of Kelowna made it illegal to sleep or lie down on sidewalks 24-7 in 2016, after first banning it during daytime hours.

The bylaw and its latest amendments had drawn fierce criticism from homeless advocates in the city.

"It’s a bylaw to target one group of people," Kristine Shepherd, who runs a Monday night meal program, previously told CTV News Vancouver. "They're specifically targeting the homeless, people with mental illness and people who suffer from addiction."

"This has to be done to protect those who want to use the sidewalk," he told council. "If a road is blocked we send in the RCMP to move them. If a sidewalk is blocked then I hope we send someone in there to move them too."

But not all councillors were on board with the bylaw.

"I would like to see this bylaw delayed for at least two weeks or till the next meeting so we can study what's happened to other municipalities that have tried something similar," said Coun. Bloomfield.

Bloomfield also offered his concern that the city hadn't studied the legal ramifications of such a bylaw.

A concern dismissed by the mayor.

"We were also put in office to make decisions without the fear we might have to go through litigation," Vassilaki said. "Our job is to do what is right for the community and city of Penticton."