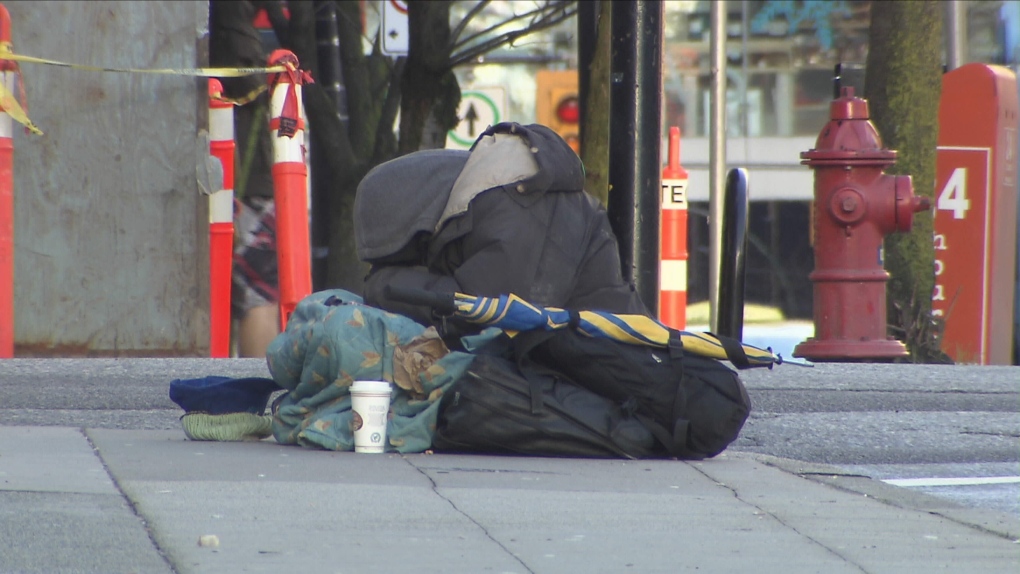 A person sits huddled on a Vancouver sidewalk the day of the city's annual homeless count. March 24, 2015. (CTV)

A B.C. mayor is pushing back against criticism that the city's proposed bylaw amendments will target homeless people.

In a decision on May 21, Penticton's city council passed first, second and third readings of amendments to their Good Neighbour bylaw that would stop people from sitting or lying down on some city sidewalks.

The amendments apply to sections of three streets, which the city says make up about 17 per cent of the downtown core.

The amendments would also stop people from gathering outside vacant stores, and would be in effect every year between May and the end of September. Violators could face a potential $100 fine.

The final amendments will be voted on by council on June 4.

In a statement posted to the city's website Thursday, Mayor John Vassilaki defended the potential additions to the bylaw.

"Downtown residents and businesses are tired of the bad behaviour and brazen crime they are witnessing and they’re demanding more solutions," he said in the statement.

Vassilaki acknowledged he had heard from citizens in the week since the amendments who suggested the bylaw would target homeless people, but denied that bylaw officers would indiscriminately ticket them.

"Since our last Council meeting, concerned residents have said the proposed amendments will impact those without a home. That’s possible," he wrote. "If someone who is homeless is obstructing passage along one of three designated sections of downtown high-traffic sidewalks…they will likely be approached by Bylaw Officers and be asked to move."

But the move has faced intense criticism from local homeless advocates.

Kristine Shepherd, who has run a Monday night meal program in downtown Penticton for several years, called the amendments "discriminatory."

"It’s a bylaw to target one group of people," she told CTV News Vancouver. "They're specifically targeting the homeless, people with mental illness and people who suffer from addiction."

Shepherd says her meal program has faced harassment from residents in the days since the bylaw amendments were discussed.

In one case, she says, someone drove by and swore at people having a meal.

She says the amendments are a result of inaction from city council for years. Shepherd argues that council let the situation deteriorate to a point where citizens started complaining.

"They've got their heads in the sand. They could've taken care of these issues a long time ago. The previous council could've dealt with it," she said.

Instead of the proposed bylaw amendments, she calls for a more comprehensive response to homelessness in the Okanagan city.

It's not the first time a bylaw has targeted people sleeping on the street in the Okanagan.

The City of Kelowna made it illegal to sleep or lie down on sidewalks 24-7 in 2016, after first banning it during daytime hours.