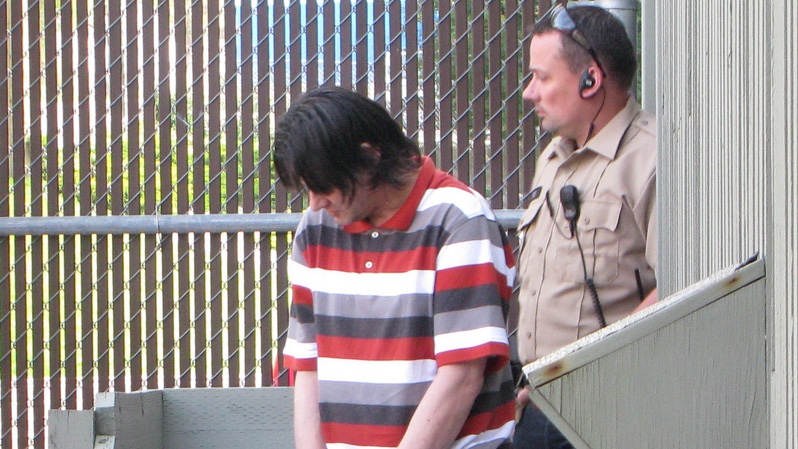 Randall Hopley leaves his sentencing hearing at the courthouse in Cranbrook, B.C., on Thursday, July 19, 2012. (Bill Graveland / THE CANADIAN PRESS)

CRANBROOK, B.C. -- Even as a teenager, psychiatric assessments of  child abductor Randall Hopley concluded he was likely to continue  offending and had no empathy for his victims.

The assessments were done 30 years ago, when Hopley was 17 years  old, after three children at his foster home were sexually  assaulted.

On Monday, the assessments were presented in a Cranbrook, B.C.,  court, where the Crown is asking that Hopley be labelled a dangerous  offender for kidnapping three-year-old Kienan Hebert from his  Sparwood home in September 2011.

The boy was returned -- seemingly unharmed -- a few days after he  was abducted.

Crown lawyer Lynal Doerksen introduced the reports -- the first of  which was done in July 1982 by Dr. Roy O'Shaughnessy, the  psychiatrist assigned to Hopley's case.

The assessment said Hopley initially molested the four-year-old  daughter of his care worker in 1981, and a few months later molested  a nine-year-old boy living in his foster home.

On another occasion, he molested a five-year-old boy whose  parents visited the foster home.

"He has continued offending and the court is at this point at a  loss as to how to curtail the behaviour," O'Shaughnessy wrote.

The report also noted that Hopley had a history of lighting  fires, including a barn and a trailer, simply because "he liked  it."

O'Shaughnessy also noted that Hopley couldn't understand "why  people were so upset" with his actions and that the young man  exhibited "serious, extremely poor behaviour" and a "marked lack  of empathy for his victims."

Hopley's childhood was described as "extremely chaotic" and he  was sent to a series of foster homes after the death of his father  in a mining accident when he was two years old.

At that time he began showing aggressive and hyperactive  behaviour, and O'Shaughnessy said Hopley was not a candidate for  psychiatric therapies and faced a "very bleak future."

The assessments also noted the 47-year-old man had limited  intelligence, operating at a level equal to a child in Grade 3.

A second assessment in February 1983 said "Randy will continue  to assault children without treatment."

Two retired RCMP officers testified at the hearing that they  arrested Hopley in 1985 for sexually assaulting a five-year-old boy  and that Hopley eventually confessed to the crime.

The first day of the hearing was cut short as Hopley's lawyer,  Bill Thorne, requested his client be allowed to attend the funeral  of his mother, Margaret Fink, who died last week.

Thorne said Hopley, who would be accompanied by sheriffs, also  wanted to be able to talk to family members after the service and  that he "would be embarrassed if he were to show up in shackles."

B.C. Supreme Court Justice Heather Holmes admitted to having some  reservations about granting the order but said the sheriffs were  best qualified to handle any security concerns.

The hearing, which is expected to run all week, will see the  Crown argue that Hopley should be designated as a dangerous or  long-term offender.

Thorne has defended his client as a "simple man who did a stupid  thing," and had asked for his own psychiatric assessment to be  made.

If declared a dangerous offender, Hopley could face the harshest  punishment of an indeterminate imprisonment sentence, with no chance  of parole for seven years.

A long-term offender designation would mean Hopley could, after  serving his sentence, receive a supervision order for up to 10  years.

Hebert was abducted in the middle of the night from the  second-floor bedroom of his unlocked home in Sparwood, a small town  in southeastern B.C., in September 2011.

The subsequent Amber Alert saw RCMP officers frantically scour  the area for the child while the kidnapping case made headlines  across the country. As they grew more desperate, Kienan's parents  issued an emotional public plea to the boy's abductor, asking the  man to leave their son in a safe place.

Shortly after, an anonymous 911 caller told police where to find  Kienan -- back at his home. The boy was found unharmed inside the  house, which had been empty during his absence because the family  had decided to stay with friends.

Hopley was found in a nearby abandoned Bible camp two days later,  and was apprehended after a brief police chase.

He has pleaded guilty to breaking into the Heberts' home and  abducting the boy.

Hopley has consistently insisted that he never harmed or sexually  assaulted the boy, and the Crown has presented no evidence that he  did.