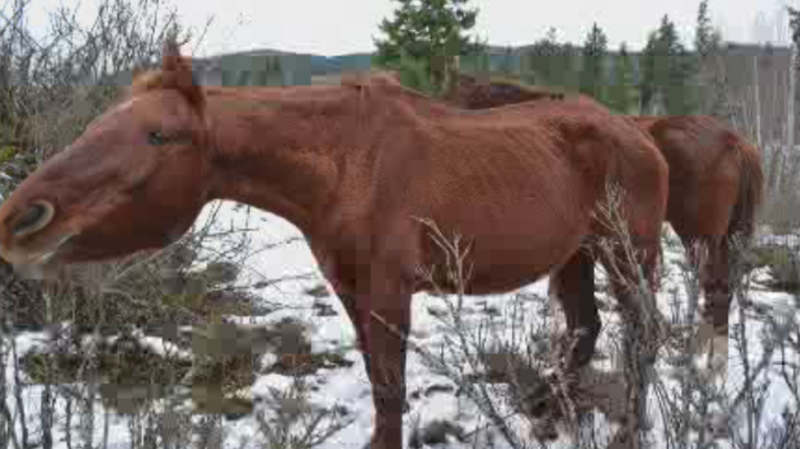 The BC SPCA seized 16 emaciated horses from Gary Roberts's Armstrong property last year. Three of the animals were in such bad shape they had to be put down. (Handout)

A convicted animal abuser from B.C.'s North Okanagan has been given a record-long jail term after breaching his conditions.

Armstrong resident Gary Roberts, 69, has been ordered to spend nine months behind bars, the longest sentence ever imposed in an animal cruelty case in the province, according to the SPCA.

Roberts was convicted on two counts of animal cruelty in December 2016 after animal protection officers seized 16 emaciated horses from his property. Three of the horses were in such bad shape they had to be euthanized.

In March, he was sentenced to a 20-year prohibition on owning animals, four months of house arrest and a nine-month conditional sentence, but the senior violated his conditions within weeks.

"On April 12 he was back in court and the judge handed down the strongest sentence possible, noting that Roberts had shown a blatant disregard for his court order," BC SPCA senior animal protection officer Kathy Woodward said in a news release.

The SPCA said there are up to 30 horses remaining on his Armstrong property, but arrangements have been made to have his family and friends care for or sell off the animals.

Some of the horses initially seized from Roberts were so badly emaciated they were registered at 0.5 on the body condition scale that normally runs from one to nine, according to the SPCA.

The animal welfare agency said it hopes Roberts's jail term will act as a deterrent to others.