Attempt to 'profit' from Otter vs. Koi rubs some Chinatown advocates the wrong way

VANCOUVER - Less than 24 hours after the news broke that Vancouver’s Dr. Sun Yat-Sen garden’s koi pond was again being plundered by a hungry otter, a local news blog started selling "Chinatown Otter" t-shirts for $25, promising to donate part of the sales to the garden "to help replace the koi the little critter ate."

But the garden says they haven’t been contacted by any organizations wishing to provide donations, and will not be accepting donations related to the otter break-in.

Vancouver Is Awesome’s editor-in-chief, Bob Kronbauer, posted the t-shirt offer on Sunday. The shirt shows a “Chinatown Otter” holding a koi near its mouth, and includes the cheeky logo, “devouring koi since 2018.”

Chinatown advocates who saw the post said they were cringing at what looks like an attempt to “try to profit” off of the viral, social media-driven story.

“I rolled my eyes when I saw them doing it,” said Louis Lapprend, the founder of Chinatown Today. The non-profit group hosts inter-generational events that celebrate Chinese culture and the neighbourhood in the face of gentrification pressures.

An otter first began killing koi in the Dr. Sun Yat-Sen Classical Chinese Garden in the fall of 2018. The story became a social media-driven sensation, with many Vancouver residents taking delight in the animal drama. A debate unspooled on Twitter, with some people declaring themselves “team otter” while others proclaimed they were “team koi.”

Chinatown Today attempted to leverage the attention by creating “team otter” and “team koi” buttons, with a plan to donate all the profits to the garden to replace the koi.

“Last year, we rushed to do it because we felt that the popularity of the Chinatown otter is getting out of hand, and somebody is going to try to profit off it … and they’re going to reinforce an insensitive narrative about what is happening in the neighbourhood,” Lapprend said.

The group raised around $500 through the button sales, but Lapprend now says he regrets going ahead with the buttons without first checking with the garden.

“From what I understand, they didn’t want to appear that they were siding with the koi or the otter - they wanted to appear neutral,” Lapprend said.

Eventually, the garden announced that because they had been able to replace the koi with donated fish, they would send the donations they had been given for the koi to the Wildlife Rescue Association of BC. 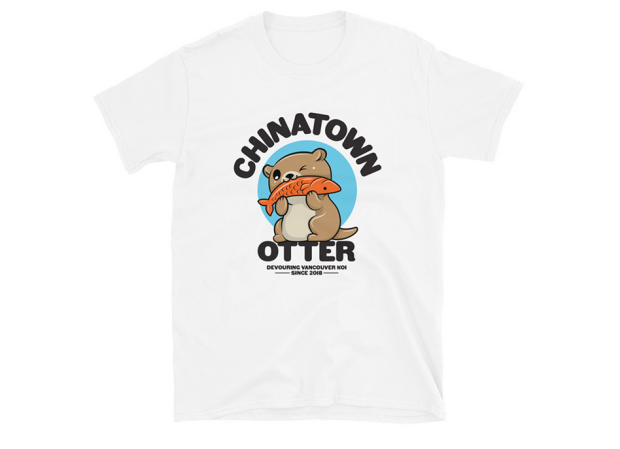 A local news blog promised to donate some of the proceeds from "Chinatown Otter" t-shirts to the Dr. Sun Yat-Sen garden. Photo: Vancouverisawesome.com

Martha Nelson, the garden’s marketing manager, said the Dr. Sun Yat-Sen garden is “deeply moved by the support from our community,” but will not accept donations related to “the incident.”

“Should any organizations wish to create merchandise we would strongly encourage them to donate the proceeds to a wildlife organization,” she wrote in an email to CTV News Vancouver.

Kronbauer declined to speak to CTV News Vancouver for this story.

Some Vancouverites have cheered on the rapacious otter, including Premier John Horgan, who declared himself #teamotter in 2018. That prompted a rebuke from Horgan’s fellow NDP MLA, George Chow.

@jjhorgan I hear you’re #TeamOtter? Sorry to tell you but the buffet is closed and it’s time for your furry friend to go home. I am #teamKoi

Kevin Huang of the Hua Foundation hopes the story will ultimately lead people to learn more about the Dr. Sun Yat-Sen garden – a place of tranquility in the midst of the busy city – and the cultural significance of koi to East Asian culture.

“They’re a symbol of strength, perseverance and also beauty,” Huang said. “When you see them dead like that, it’s really impactful for some people who go to the garden every day and expect to see koi.” 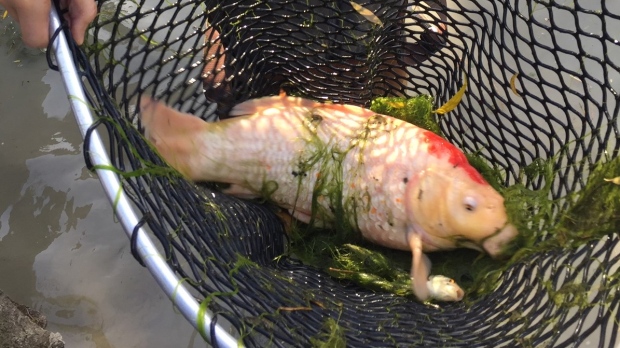 A worker rescues a koi fish from the Dr. Sun Yat-Sen garden pond on Saturday, Nov. 2, 2019. Photo: Vancouver Park Board.

While some people on social media have called the koi “invasive species,” Huang said that’s not true, because the koi are enclosed in a pond and can’t escape to the wider environment.

To Huang, the koi are a reminder of “my personal heritage.” For instance, when Huang was born, his family flew a kite in the shape of a koi.

“Both Chinese heritage and Japanese heritage have, I would say, this reverence of koi, of what it symbolized around strength and perseverance,” Huang said.

Learning from last year’s otter rampage, when an otter killed 11 koi, this year the park board lowered the water in the garden pond and evacuated the fish as soon as the otter’s presence became known.

Six koi were killed this year, but 150 small koi and 8 large koi were taken out of the garden and moved to a location in Richmond. Staff have also set out live animal traps, although last year the otter eluded similar attempts to capture it.

While the garden was closed on Saturday and part of Sunday, it has now reopened.