April sets record for most B.C. flights with COVID-19 exposures

VANCOUVER -- More flights with COVID-19 on board have passed through B.C. airports in April than during any other month of the pandemic, according to a CTV News Vancouver analysis of data from the B.C. Centre for Disease Control.

The centre regularly publishes lists on its website of flights that took off from or landed at B.C. airports and had at least one infected person on board. It also keeps an archive of such exposures that dates back to March 2020.

In that time, there have been more than 1,400 flights added to the list. The vast majority of those flights, 1,072 of them, have been domestic.

The number of affected flights B.C. has seen mirrors the pattern of new cases being detected in the province over time. There is an initial "wave" of 41 flights reported in March 2020, followed by a flattening over the late spring and early summer.

In July 2020, the number of flights begins rising again, eventually building into a second wave that peaks at 194 total flight exposures in December of that year, before declining in January and February and surging again in a third wave in March and April of this year.

More flights that had COVID-19 cases on board in April are still being added to the list, and will continue to be for a few weeks as people test positive and the BCCDC is notified. Already, however, April is the month with the highest number of flight exposures on record, with 212. 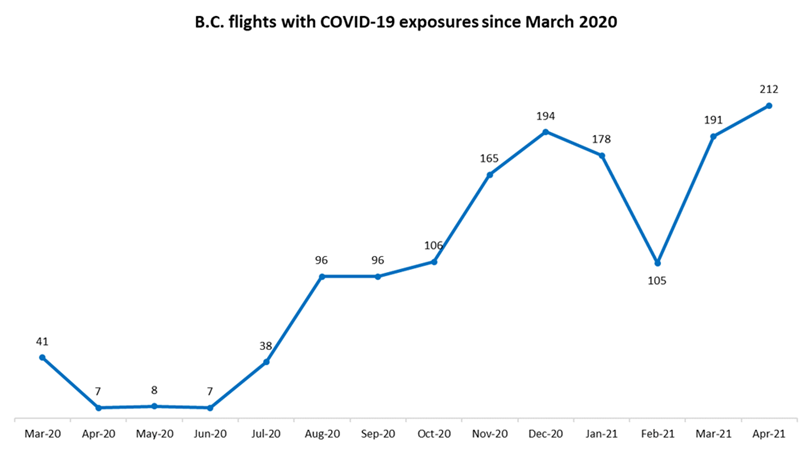 Graph of flights that took off from or landed at B.C. airports and had a case of COVID-19 on board, by month, according to BCCDC data.

When CTV News asked the BCCDC whether the recent surge in flights with the coronavirus on board was likely to increase the spread of the virus in the province or merely reflected spread that was already taking place, the centre indicated that it believes the latter is more likely.

"BCCDC does not have readily available data to determine whether the proportion of cases on flights has increased or whether the increase is a result of the total number of flights and passengers travelling," the centre said in an emailed statement. "It is likely that the incidence of cases on board planes would be proportional to the incidence and transmission occurring where the plane originated."

Studies have shown that COVID-19 transmission on airplanes is rare, though there have been examples of it happening.

"Exposure on planes is not driving COVID-19 transmission in B.C.," the BCCDC said. "The majority of cases in B.C. are the result of transmission from a known case or cluster often at home, in the workplace or through social interactions."

Still, the centre continues to post exposure notifications about flights with cases on board, warning passengers to self-monitor for symptoms and seek testing and self-isolate if any develop.

And the number of flight exposures continues to rise.

Early on in the pandemic, a much higher proportion of flights flagged each month were international. As community transmission took hold across Canada, however, the ratio began to shift. What was once a roughly 50-50 split has become something closer to a four-to-one ratio of domestic flights to international ones.

Graph of flights that took off from or landed at a B.C. airport and had a COVID-19 case on board, broken down by domestic and international flights. (BCCDC data)

International travellers are required to provide proof of a negative COVID-19 test before boarding flights bound for Canada. They're also required to self-isolate for 14 days upon arrival, three of which must be spent in a government-approved quarantine hotel awaiting the results of another COVID-19 test.

No such requirements exist for domestic flights in B.C., though provincial health officials have been strongly discouraging non-essential travel and recently introduced rules allowing police to issue $575 fines to those found leaving their health regions for non-essential purposes.