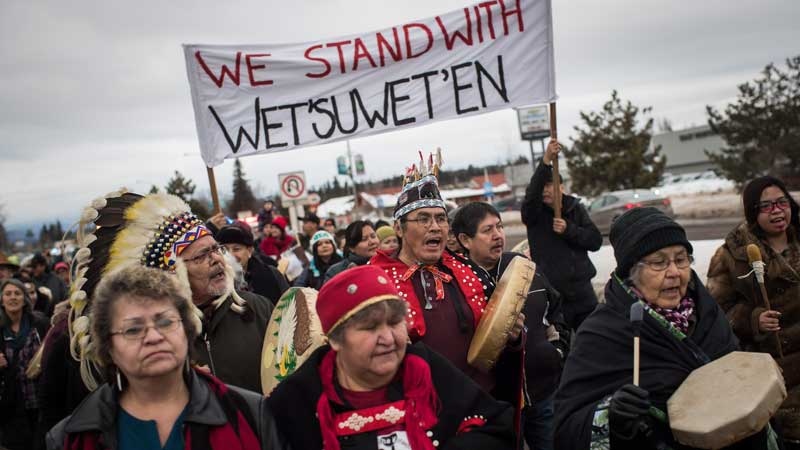 VANCOUVER -- The RCMP has formally ended its enforcement operations in a region of northern B.C. that's at the centre of a pipeline dispute as protests across the country continue to cause disruptions, most notably to Canada's rail network.

The economic impact of the demonstrations began to crystallize Tuesday as Canadian National Railway Co. warned it will have to close “significant” parts of its network unless blockades on its rail lines are removed.

More than 150 freight trains have been idled since the blockades were set up last Thursday in British Columbia and Ontario.

Passenger rail services have also been affected in Ontario, Quebec and B.C., with Via Rail cancelling service on its Montreal-Toronto and Ottawa-Toronto routes until the end of the day on Thursday because of a blockade near Belleville, Ont.

Chief executive JJ Ruest said the CN network gives the company limited parking space for its trains, which means traffic is backed up from Halifax to Windsor, Ont., and in parts of B.C. approaching Prince Rupert.

In Victoria on Tuesday, demonstrators also disrupted the business of the B.C. legislature as Lt.-Gov. Janet Austin delivered the NDP government's throne speech.

Protesters, who have been camping outside the building since Friday, chanted “Shame” as politicians tried to enter the building with help from security.

The RCMP began enforcing a court injunction last week near Houston against Wet'suwet'en hereditary chiefs and their supporters who have been blocking construction of the Coastal GasLink pipeline, a key part of the $40-billion LNG Canada liquefied natural gas export project.

The RCMP said Tuesday that a temporary exclusion zone in the area was removed and everyone was free to enter the area. The police force is maintaining an office on a forest service road at the centre of the dispute to continue patrols.

“The right to peaceful, safe and lawful protest, and freedom of expression, are important parts of Canada's democracy,” the Mounties said in a statement. “However, blocking roadways is both dangerous and illegal.”

Via Rail said 157 passenger trains have been cancelled, affecting 24,500 travellers on routes between Montreal and Toronto, and Ottawa and Toronto.

In addition to the service cancellations in Ontario, Via says a blockade near New Hazelton, B.C., also means normal rail service is being interrupted between Prince Rupert and Prince George.

Transport Minister Marc Garneau said he is working with his Ontario counterpart Caroline Mulroney to find a solution to the blockade in that province.

Ruest said CN Rail had to temporarily discontinue service in its key corridors because of the blockades.

“The impact is also being felt beyond Canada's borders and is harming the country's reputation as a stable and viable supply chain partner,” he said in a statement.

The Canadian Manufacturers and Exporters Association, whose members typically load about 4,500 rail cars a day, urged government officials to work with police to restore service on the tracks.

“In Canada there's not really other alternatives to move stuff around. The highways and trucks - especially in Quebec and southern Ontario - are already at a very, very high utilization of available capacity,” association president Dennis Darby said in an interview.

Stakeholders from chemical companies to Dannon Yogurt called this week to raise concerns, he said.

“They can't get their stuff out.”