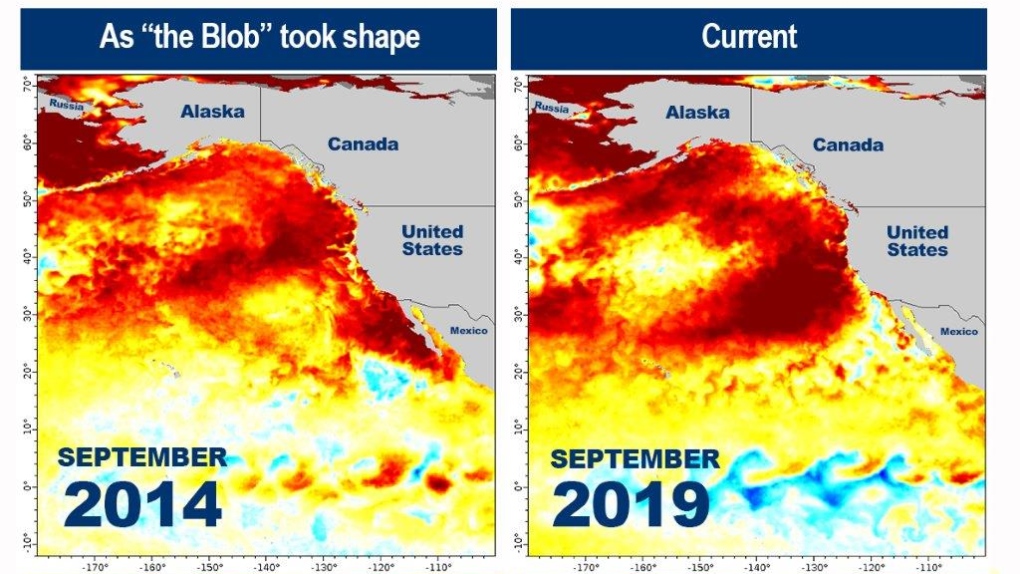 Roughly five years after a marine heatwave dubbed "the Blob" led to decreased salmon stocks in the Northeastern Pacific, researchers are seeing another troubling rise in ocean temperatures.

Scientists caution the latest heatwave detected off the B.C. and U.S. coasts resembles the early stages of the Blob, which sent waters warming up to 5 C above seasonal averages.

Andrew Leising, a researcher with the U.S. National Oceanic and Atmospheric Administration, said what they're seeing today is already "on a trajectory to be as strong as the prior event."

"On its own, it is one of the most significant events that we've seen," Leising said in a statement.

The Blob was the largest marine heatwave recorded in the Pacific over the last 40 years, and the new heatwave, which runs from Alaska to southern California, already ranks second.

Scientists said they are monitoring its progress closely, ready to alert fisheries and other stakeholders about the potential negative effects.

The less hospitable conditions of the original Blob meant less food for fish and marine mammals, causing a significant drop in salmon returns, according to the NOAA.

Thousands of young California sea lions also became stranded as their mothers went foraging further and further for meals, and the warm water contributed to a record-breaking algae bloom that shut down crabbing and clamming for months.

Even humpback whales were affected. During the heatwave, the whales fed closer to shore, causing a record-number of entanglements in crab traps and fishing gear.

But it's unclear whether the new marine heatwave will stick around long enough to have similar impacts. As of now, researchers say it's "primarily affecting the upper layers of the ocean," and could break up rapidly.

"It looks bad, but it could also go away pretty quickly if the unusually persistent weather patterns that caused it change," Nate Mantua, a researcher from the Southwest Fisheries Science Center, said in a statement.

According to the Department of Fisheries and Oceans, climate modeling has determined human-caused global warming is the best explanation for the original Blob, which came amid a steady increase in overall water temperatures in the North Pacific Ocean that’s been going on for decades.

Researchers have recorded annual jumps of 0.1 C to 0.3 C a year since 1950, and the warmer waters have led to a number of ongoing problems for salmon and other marine life.