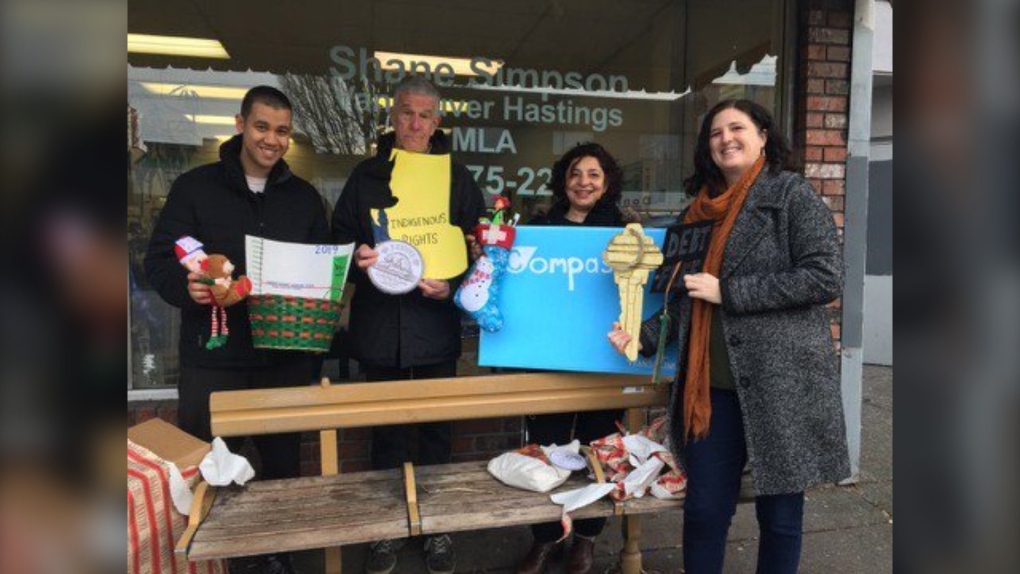 Members of the Poverty Reduction Team delivered a gift box to MLA Shane Simpson's office Monday, calling for policy change to reduce poverty in the province.

VANCOUVER -- B.C.'s minister of social development and poverty reduction got a visit from advocates Monday morning who say they want to see policy changes rather than so-called Band-Aid solutions in the province's efforts to address poverty.

A group from the Poverty Free Action Team, an initiative with the BC Poverty Reduction Coalition, delivered a gift box to MLA Shane Simpson's office in Vancouver Monday complete with items aimed to represent what they're calling for.

"Around this time of year, Canadians are encouraged to donate to support people living in poverty," said Viveca Ellis, interim community organizer at the BC Poverty Reduction Coalition, in a news release.

"The best gift that would truly keep on giving is sustainable support in the form of comprehensive policy change and significantly increased investments through TogetherBC that will improve people's lives year-round and help lift them out of poverty."

TogetherBC is the province's first poverty reduction strategy, which was released in March. The goal of that strategy is an overall reduction by 25 per cent and a 50 per cent reduction for kids. The government aims to achieve this goal by 2024, as required by law.

The reduction is based on Statistics Canada's estimates from 2016, suggesting 557,000 people including 99,000 kids were living in poverty. The province enshrined poverty reduction into law in fall 2018.

At the time the strategy was released, Simpson said there were many reasons the province should work to reduce poverty.

But the Poverty Free Action Team says it hopes those efforts to reduce poverty amount to policy shifts.

In its gift box delivered to Simpson's office, the Poverty Free Action Team included coins meant to represent their call to accelerate minimum wage increases. A "caring elf" was also included in the box to signify the $10-a-day child care plan and to build publicly-funded child care facilities.

A giant key was in the gift box as well, representing a call for vacancy control and 10,000 units per year of social and co-op housing. They also included a giant Compass Card, calling for free transit for children and youth and a sliding scale for adults.

"While we acknowledge the generosity of British Columbians, the BC Poverty Reduction Coalition upholds a 'rights not rescue' approach to ending poverty rather than a dependency on a charitable response which only slaps a Band-Aid on poverty," Ellis said.

The government is required to report on its progress to reach its five year targets annually, starting next year.

CTV News Vancouver has reached out to Simpson's office for comment.