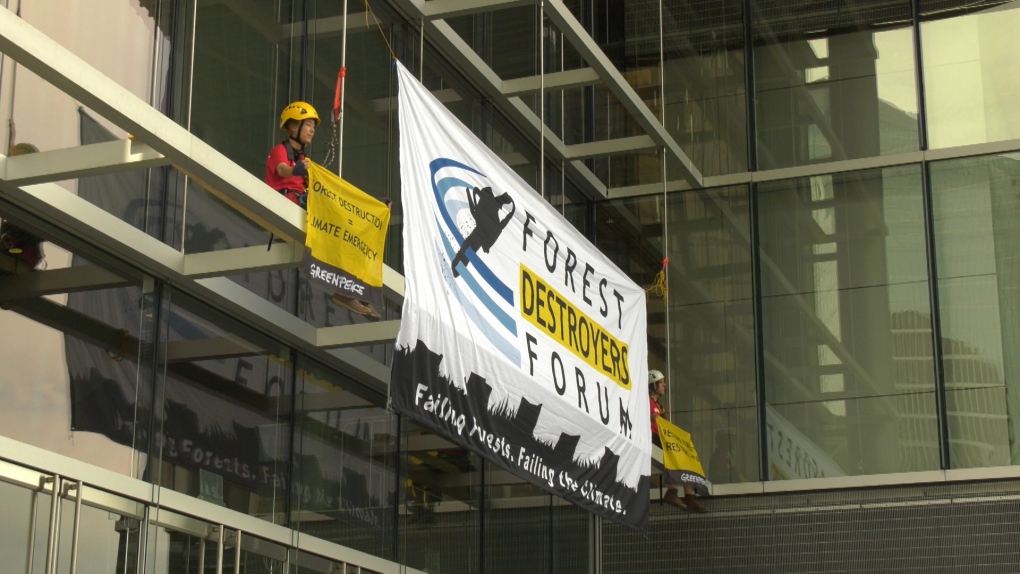 Greenpeace activists hang a banner over an entrance to the Vancouver Convention Centre during the 2019 Consumer Goods Forum Global Summit on June 12, 2019.

Greenpeace activists have draped a banner onto the Vancouver Convention Centre as part of a protest against corporations' role in driving climate change.

The demonstration was timed to coincide with the Consumer Goods Forum Global Summit, which is being held inside the building Wednesday. Two climbers made their way over an entrance to hang a banner reading "Forest Destroyers Forum."

"Greenpeace is here today to call out the companies that are breaking their promises to end deforestation," campaigner Daniel Brindis said.

Brindis said the climbers would remain on the building "until they feel their message is herad."

Back in 2010, the Consumer Goods Forum pledged to reach net zero deforestation by the year 2020, in recognition of the massive impact the process has on greenhouse gas emissions.

"Whilst the causes of deforestation are complex, it is generally acknowledged that the biggest drivers are the cultivation of soya and palm oil, logging for the production of paper and board and the rearing of cattle," the CGF said in its pledge. "All of these commodities are major ingredients in the supply chains of most consumer goods companies. Our member companies drive the demand for these commodities and have an opportunity to ensure that the sourcing of these ingredients does not contribute to deforestation."

But Greenpeace International has expressed concerns that not enough is being done. From the time the CGF's goal was announced in 2010 to the 2020 deadline, Greenpeace estimates about 50 million hectares of forest will have been destroyed by global commodity production.

"2020 is 200 days away, and these companies are very far from reaching this deadline," Brindis said. "These companies need to take transformative action if they want to reach this deadline, otherwise, if they don't end deforestation, they are threatening the world's climate and they are also putting one million species at risk."

The Consumer Goods Forum has acknowledged the goal of net zero deforestation was "more complex than almost any stakeholder realized in 2010," but said it's still "substantially closer" to reaching its goal of sustainable sourcing of soya oil, palm oil, logging for paper and board and cattle-rearing.

None of the Greenpeace activists involved took part in last year's headline-making protest on the Ironworkers Memorial Bridge, according to the organization.

In 2010, brands committed to stop deforestation by 2020. But with only a few months left, they are nowhere near that goal. In fact, an area the size of Spain is set to be destroyed for commodities during the 10 years of their commitment.#ForestsAreLife #CGFSummit pic.twitter.com/nKhTlcS6p0