Vandalism caught on camera in Chinatown over the weekend left a new mural damaged and had the local business community sharing their frustration with ongoing graffiti and other property damage.

The video was captured by a security camera at eevee’s, a store selling e-scooters and other personal electronic vehicles, early Sunday morning on East Pender Street.

It shows someone spray-painting the side of a neighbouring business, the Ten Ren Tea and Ginseng Company. The person occasionally ducks into an alley but re-emerges repeatedly over the course of about 15 minutes, sometimes with people passing by.

The resulting graffiti obscured part of a multi-panel mural by artist Carolyn Wong, which was commissioned by the Vancouver Chinatown Business Improvement Association (BIA) in partnership with the Vancouver Mural Festival and Dr. Sun Yat-Sen Classical Chinese Garden. The mural had only been completed a few weeks ago.

Vancouver Chinatown BIA President Jordan Eng said the artwork was for the community and for people to appreciate the area’s culture.

"It’s really disheartening to see this sort of activity and we see it on a regular basis," he said. "It’s property damage. It creates a perception in the neighbourhood that we don’t care – and we do care."

'WE SEE NEW GRAFFITI UP EVERY SINGLE DAY'

"I hate to say it, but I’m surprised it lasted five weeks in this neighbourhood, because we see new graffiti up every single day," he said. "In the 13, 14 months we’ve been open now, we’ve spent over $30,000 in repairing our broken glass, broken doors multiple times, putting anti-graffiti coatings on our paint, clearing off old graffiti, it just never ends." 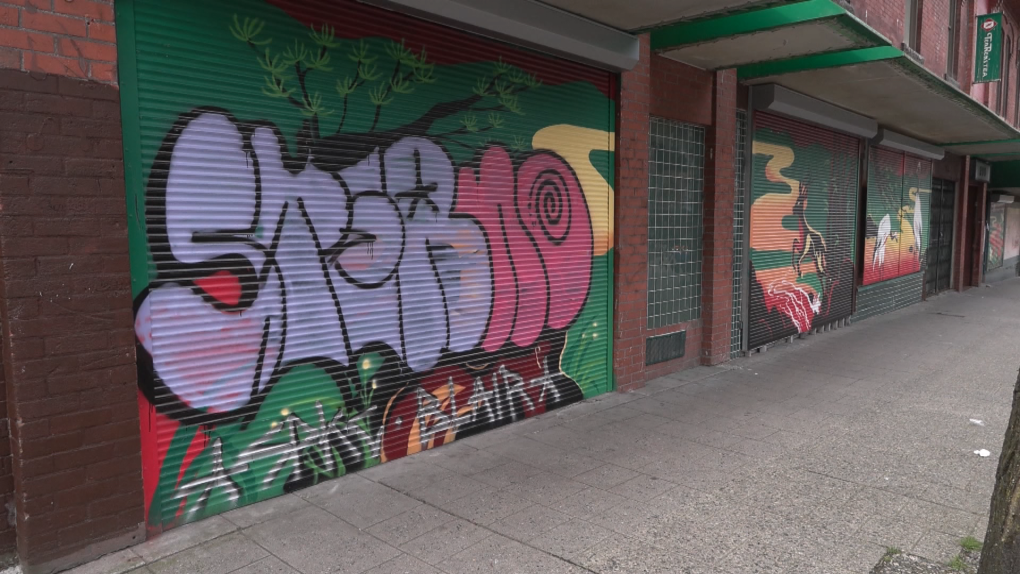 Not far away in Mount Pleasant, the executive director of the neighbourhood’s BIA, Neil Wyles, said some murals in the area have been hit with graffiti so many times repairs have had to stop.

"I hate to say (we've) given up, but we’ve kind of given up on repairing these. We’ve had enough and the budget is only so long," he said. "The Mount Pleasant BIA will spend around $100,000 this year on removing graffiti or repairing things like this, and that is a significant amount of money and we could do a lot of other things to the benefit of this neighbourhood and to the people of Vancouver with that amount of money.”"

Wyles said there are some graffiti vandals who are prolific, with "hundreds and hundreds of tags."

"At some point, the VPD (Vancouver Police Department) and the justice system need to say enough," he said. "It’s not a victimless crime."

Spence said he’s been tempted to camp out in his store to try to catch someone in the act and give them a piece of his mind. He also reported the vandalism to the mural next door to the police.

"I’m going to report it every single time, even though it doesn’t feel like they do much about it," he said. "The city needs to get tougher on crime, especially when it’s a huge issue for all these businesses."

Vancouver police spokesperson Const. Tania Visintin said graffiti has been occurring more often in the Chinatown neighbourhood, and "we’re asking anybody to call us as soon as they see that this happens."

In an emailed statement, the city of Vancouver said they recognized “Chinatown is facing an increase in graffiti and vandalism”.

The Vancouver Mural Festival told CTV News the damaged artwork does have an anti-vandalism coating, and will be cleaned.

He’s also hoping people will give local businesses a boost by paying a visit to the area.

"Come down and support the businesses in Chinatown,” he said. “We need more people on the street. The businesses would appreciate it."

Spence also has a message for those causing the vandalism and damage.