'A hallway is not a bedroom': Twitter mocks miserable Vancouver rent ads 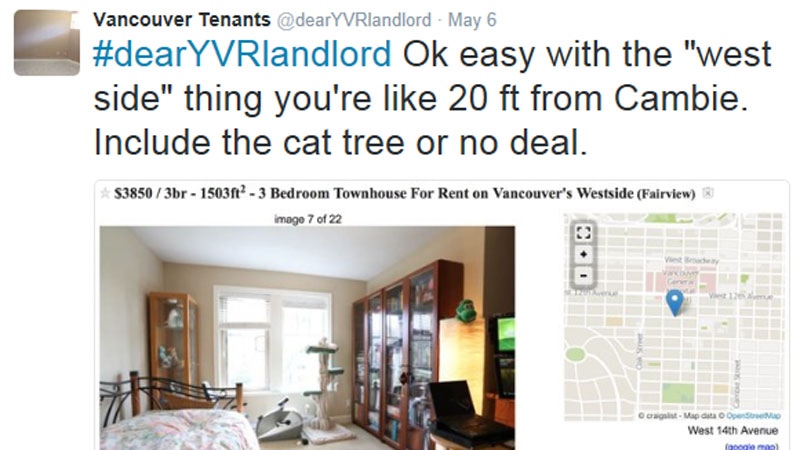 Attention Vancouver landlords: a closet is not a "flex space," a kitchen should be more than a hot plate, and "renovated" doesn't just mean a new sink.

A sarcastic Twitter user is taking aim some of at Metro Vancouver's less desirable living spaces through the account @dearYVRlandlord.

"Poor man's Hotel California," Sclauzero wrote of a basement unit with pieces of wood nailed over the windows.

"Time for another edition of 'Come live in my recently-deceased Grandma's in-law suite,'" another post reads.

#dearYVRlandlord Time for another edition of "Come live in my recently-deceased Grandma's in-law suite". pic.twitter.com/8QuUReAoMf

Sclauzero, who works at a museum when she's not on Twitter, said the idea came to her when she was evicted from her former home because her landlord said he was moving into the space.

She said she wasn't expecting to find a luxury mansion or a condo covered in marble, but still she was discouraged by the quality of what was available.

"I was getting really frustrated with what I was seeing," she told CTV Vancouver on Monday.

"It's a huge landlords' market. There's not a lot of laws favouring tenants."

Sclauzero took to the Internet to vent her frustrations and start a conversation about the quality of affordable rental properties available.

"I didn't think there was a lot of attention being paid to the rental market even though a lot of people in the city rent," she said.

Although she found a nice property for a good price, and has no complaints about her current landlord, "I wish that everyone else had as easy of a time," she said.

She said she didn't want to be mean or "shame" the landlords in the ads.

However, she did want to call attention to the current state of a rental market where landlords can advertise a room with a bar fridge instead of a kitchen as a "bachelor suite" – an actual example she found during her search.

"I don't want people who don't have a lot of money to have to live in a single room with a bar fridge," she said.

She finds ads herself, but also gets inspiration from her 1,300 followers, who share their finds using the hashtag #dearYVRlandlord.

Another ad she shared advises future renters that the apartment is "not suitable" for anyone taller than six feet, or who works nights and sleeps during the day, because of the noise from their children.

#dearYVRlandlord 1. Even if I'm not into babysitting your kids I need to have daytime avail. & childcare experience? pic.twitter.com/jeUWJtroVv

Last week, Sclauzero posted an ad for an apartment with a three-piece, dark green bathroom: "OH COME ON for $1400 plus utilities I at least expect a matching hunter-green toilet seat," she wrote.

#dearYVRlandlord OH COME ON for $1400 plus utilities I at least expect a matching hunter-green toilet seat. pic.twitter.com/3SQ75basOB

"#dearYVRlandlord a hallway is not a bedroom; a closet with no door is not a flex space," one of the earlier tweets scolds.

#dearyvrlandlord A hallway is not a bedroom; a closet with no door is not a flex space. http://t.co/rH3jO93YHH #ample pic.twitter.com/6mKm2PP1u8

Sclauzero's sister, who lives in Toronto, recently started a similar account called @dearYYZlandlord, where residents of that city can vent their frustrations.

One of the Toronto tweets reads, "Quiet! Because no one will ever come listen to you cry in this dungeon of sadness."

"I don't know what changes this will bring, but I'm excited," Sclauzero said.