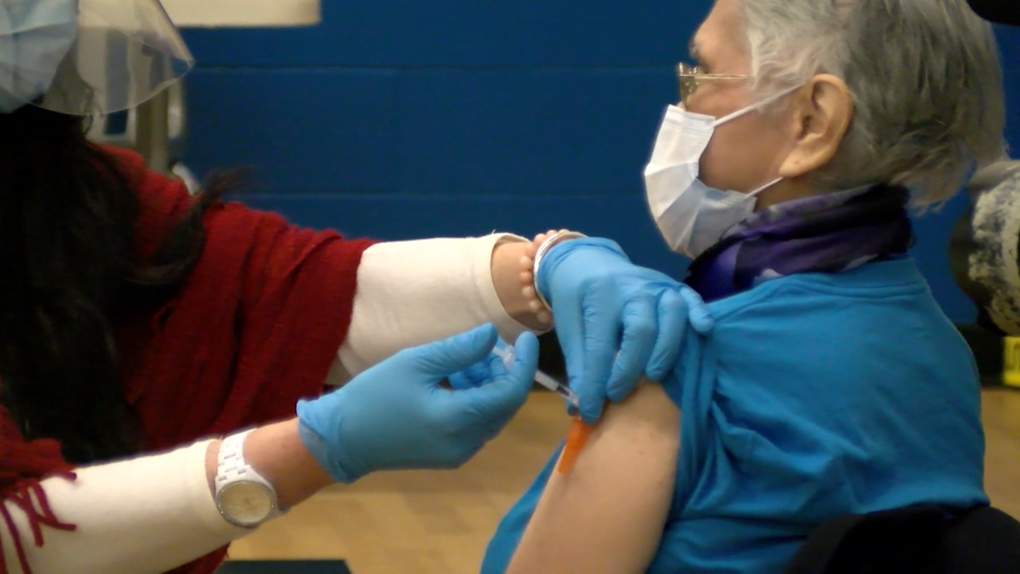 A resident of Prince Rupert, B.C., receives a dose of COVID-19 vaccine at a mass vaccination clinic on Monday, March 15, 2021.

VANCOUVER -- As B.C. looks to continue expanding its rollout of COVID-19 vaccines by putting furloughed tourism and hospitality employees to work in vaccination clinics, Premier John Horgan is holding up the community of Prince Rupert as an example of what can be accomplished.

Amid a rapid surge in coronavirus transmission in the city on B.C.'s North Coast earlier this month, the province announced that vaccination would be available to all residents over age 18.

Immunizations began to be offered to all adults last week, and as of Wednesday, 85 per cent of residents in Prince Rupert have been vaccinated, according to Horgan.

"Somewhere in the neighbourhood of 10,000 people were in line to get vaccinated," the premier said during a news conference Wednesday. "There's euphoria in the town that has been in dread, quite frankly, over the past number of weeks."

Horgan praised the efforts of residents who volunteered to help expedite the vaccination efforts in the region.

"Four hundred volunteers stepped up without any advertising, without any prodding to come and help, and that's the attitude we're going to need in communities right across British Columbia as we go through the next number of weeks," he said.

The premier was speaking during an announcement about partnerships with several private-sector companies and non-profit tourism organizations that will put people to work in the province's vaccine clinics.

Roughly 1,400 furloughed employees will be trained for the work and compensated by their employers with monetary assistance from the provincial government, Horgan said.

There are 14 businesses and organizations involved in the project, including Air Canada, WestJet and the Vancouver Canucks, among others.