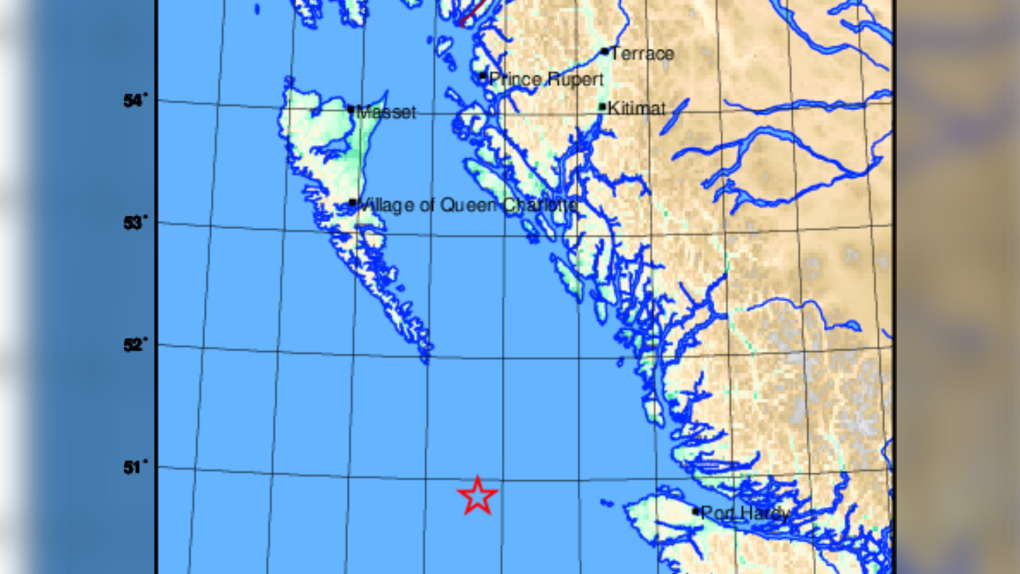 VANCOUVER -- It's been a busy week of seismic activity on the B.C. coast.

A pair of Christmas Day earthquakes struck off the northwest coast of Vancouver Island Wednesday, bringing the total number of quakes recorded off the B.C. coast to nine in the last three days.

The most recent quake occurred around 12:40 p.m. on Christmas, approximately 198 kilometres west of Port Hardy, at a depth of five kilometres, according to Earthquakes Canada.

No damage was reported as a result of the magnitude 4.9 earthquake, and no tsunami was expected, the agency said.

That quake was the second reported on Christmas Day. Another one of magnitude 3.6 was reported shortly before 8:30 a.m., 153 kilometres west of Port Alice, B.C.

Those two quakes were in the same general area - in the Pacific Ocean, more than 100 kilometres off the coast of Vancouver Island - as a magnitude 6.2 quake that occurred at 7:30 p.m. on Christmas Eve.

Five other earthquakes reported on Monday, Dec. 23, also took place in the same vicinity. Those five quakes varied in magnitude from 4.8 to 6.0, making the one recorded Christmas Eve the largest of the week, so far.

The ninth quake was also recorded on Monday, but struck near the village of Queen Charlotte in the Haida Gwaii. That quake had a magnitude of 4.3 and did not cause any damage or a tsunami warning, according to Earthquakes Canada.

None of the nine earthquakes recorded this week has caused damage or prompted a tsunami warning, nor have they even been felt by people living on the B.C. coast.