$109 fine in effect for drivers caught without winter tires on most B.C. highways 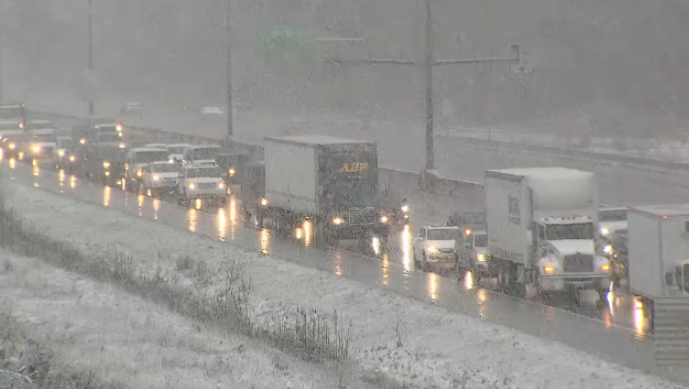 Drivers on a snowy highway.

VANCOUVER - Drivers travelling on most B.C. highways are now required to have appropriate winter tires on their vehicles.

Every year on Oct. 1, winter tires become mandatory on most of the province's highways. Specifically, drivers need tires with either "M+S" or a mountain and snowflake symbol. They also must be in good condition with a minimum tread depth of 3.5 millimetres.

"Winter is on its way and I urge people to make sure they use good winter tires, slow down when driving in winter conditions, and plan ahead by checking DriveBC," said Minister of Transportation and Infrastructure Claire Trevena in a news release.

"Conditions can change quickly on B.C. highways, especially for drivers leaving the Lower Mainland for more mountainous terrain. We want everyone to drive safely and get home to their families this winter."

Just this past weekend drivers on some highways got an early dose of winter weather. Several centimetres of snow accumulated on mountain passes including through Manning Park on the Crowsnest Highway and along the Coquihalla.

The province says tires with the mountain and snowflake markings offer the best traction on snow and ice in cold weather. Tires marked with an M+S (which stands for mud and snow) work better than summer tires in winter weather, but aren't as effective as the other tires in severe conditions.

Winter tires aren't mandatory across the entire province but on most B.C. highways. Drivers travelling on those highways without proper winter tires can receive a fine of $109.

New this year, truckers who don't chain up will pay a higher fine than they used to. Before, the base-level fine was $121 for truck drivers caught without chains during the winter months. But now, they'll be fined $196 for not carrying them, and a whopping $598 for not installing them during mandatory chain ups.

The increased fines come about a year after the province implemented new regulations on the use of chains.

Drivers of vehicles including five-ton trucks and buses with a licenced gross weight less than 11,794 kilograms must use chains on at least two tires. Those driving heavier trucks must use steel chains, but the number of tires that must be covered varies, depending on the vehicle.

Winter tire regulations end on March 31 for many highways but in some areas that date is extended to April 30.