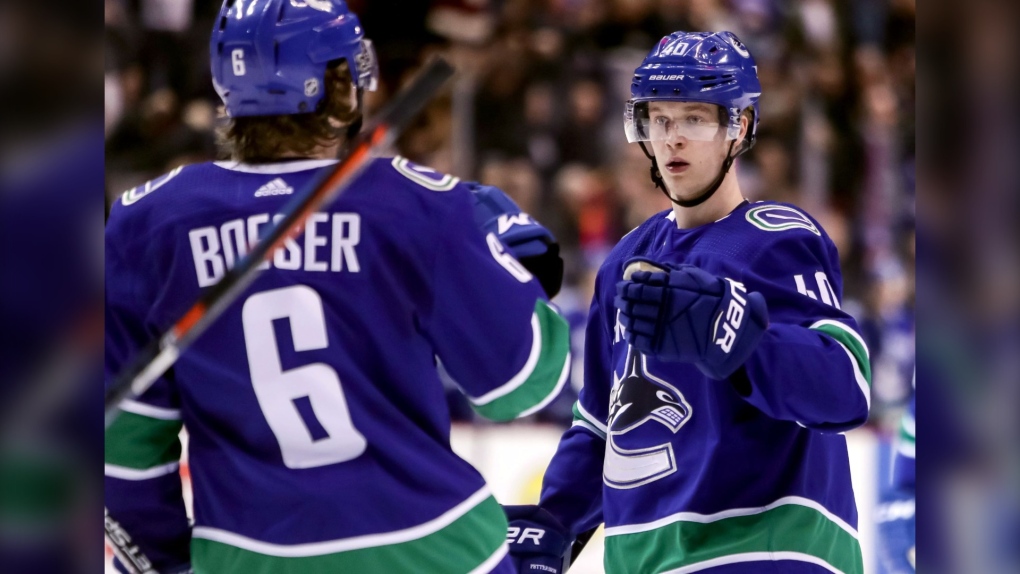 Vancouver Canucks' Elias Pettersson (40) celebrates teammate Brock Boeser's goal during first period NHL hockey action against the Vegas Golden Knights, in Vancouver on Saturday, March 9, 2019. After bolstering their ranks with some veteran talent over the summer, the Vancouver Canucks have set their sights on returning to the playoffs. Whether they make it will depend on the team's young stars, said coach Travis Green. THE CANADIAN PRESS/Ben Nelms

VANCOUVER - After bolstering their ranks with some veteran talent over the summer, the Vancouver Canucks have set their sights on returning to the playoffs.

Whether they make it will depend on the team's young stars, said coach Travis Green.

“There's a lot of teams in the league that know what they have in their lineup. We know, but our young, top-end players are the ones that really will probably determine a lot of where we end up with what kind of step they've made,” he said.

“That's not a burden. It's the exciting part of our organization and where we're going. I've said we're going to be better this year. I fully believe we will.”

Last season, all three of the Canucks' top scorers were 23 or younger.

Elias Pettersson 20, led the way, scoring 28 goals and 38 assists in 71 games, and earning the Calder Trophy as the NHL's rookie of the year.

Centre Bo Horvat, now 24, was close behind with a career-high 61 points in his fifth NHL season and 22-year-old right-winger Brock Boeser had a solid sophomore year with 56 points.

Still, Vancouver missed the playoffs for the fourth season in a row, finishing with a 35-36-11 record that left the team 12th in the Western Conference.

A spate of injuries didn't help matters, depleting the blue line and forcing Green to constantly churn his lines.

The NHL veterans are expected to bring experience to a fresh-faced lineup as well as help with toughness and scoring.

“They've been in the league for awhile and they know what it takes already,” Horvat said. “Whereas trying out young guys, you're not sure sometimes how they're going to pan out or if they're going to break into the league. It's nice having guys who've been there and done that.”

With so many lineup changes, it's key that the players get used to one another early, Green said.

The new guys may have to adjust to a few tweaks to the system, but more importantly, they'll need to get used to their teammates, he said.

“I think it's just feeling comfortable,” the coach said. “Even little things like hearing a voice on the ice, knowing who it is, it's hard to mimic that stuff. You almost need a game-like situation to get used to that and feel comfortable in your surroundings.”

The adjustment hasn't been too drastic for Myers, who signed a five-year, US$30-million deal with Vancouver in free agency.

“It's still the same game. There's tweaks here and there, but overall this is pretty similar to other years coming in. Different faces, obviously, different room,” he said. “But transition's been pretty seamless.”

After spending the past five seasons with the Winnipeg Jets, Myers is looking forward to starting with a new group.

And he feels like he's not the only one in the Canucks locker room who's excited for the upcoming season.

“Everyone's a little bit older, a little more experienced,” Myers said. “We have a great young core driving the team and we just have to come together as a group and make it work as best we can.”

The process of coming together as a group has already started, Pettersson said.

“I have fun every time I come to the rink,” he said. “When we practise, we're practising hard and we can also have a laugh and make jokes with each other so it's great. That's what you need to have in a team.”

Vancouver will kick off the season Wednesday when they battle the Oilers in Edmonton.