Woman tells of abuse in polygamy, but wants it legal 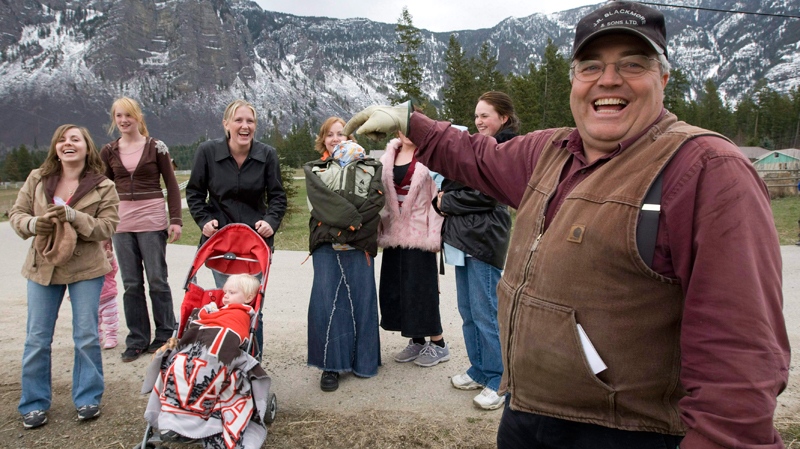 Winston Blackmore, the religious leader of the polygamous community of Bountiful, B.C., shares a laugh with six of his daughters and some of his grandchildren, in this April 21, 2008 photo. (Jonathan Hayward / THE CANADIAN PRESS)

Carolyn Jessop had been married for nearly two decades in a polygamous community in the United States -- becoming one of six wives and giving birth to eight children -- when she saw a chance for escape.

She was 35, married to a man 32 years her senior, and living in the fundamentalist Mormon community of Colorado City, Ariz.

The isolated community, along with the city of Hildale just over the Utah border, was effectively controlled by the Fundamentalist Church of Jesus Christ of Latter Day Saints, or FLDS. The mainstream Mormon church renounced polygamy more than a century ago.

Jessop's eldest son was away working on a construction site most of the time, but he happened to be in town at the same time her husband, Merril, was away on business.

"That was my window -- my family was home, Merril was gone," Jessop, now 43, recalled Wednesday at a B.C. court case examining the constitutionality of Canada's anti-polygamy law.

"I started waking up my kids about 4 o'clock in the morning. They didn't know what I was doing. They were terrified of the outside world."

There were many complications.

Her second-youngest son had cancer, and required the use of oxygen and feeding machines. It was her husband's refusal to get that son treatment that pushed Jessop over the edge.

She had access to an unregistered and uninsured van, and she wasn't sure it had enough gas to reach her brothers, who themselves had left the FLDS years earlier and would be waiting for her along the highway.

The police in the community, Jessop testified, took orders from the FLDS and wouldn't allow her to leave if she was caught.

And just before she pulled away, her eldest daughter Betty ran back into the house.

"Betty was the one I was the most concerned about, so I thought, 'Do I take seven and I never see her again but I save seven? Or do I go back after her and none of us make it out?"' said Jessop.

"I couldn't do it, I couldn't leave her. I ran back in the house, Betty was in her room, sobbing, and she said, 'Mother, what are you doing? Something you're doing is wrong.' I remember grabbing her hand and saying, 'Betty I won't leave you behind,' and I ran with Betty to the van."

The van did make it out of town undetected, running out of gas just as she reached her waiting brothers. They took Jessop and the kids to Salt Lake City, where she began years of hiding in shelters and fighting an arduous -- and in the end successful -- legal battle for custody of her children.

Jessop said her doubts had started long before she finally left.

The marriage meant she couldn't pursue her dream of attending college and becoming a doctor, and she was already watching her children's education cut short, their opportunities taken away.

Her children also faced physical abuse, including something she described as "water torture" when they were babies. Jessop said it involved spanking babies until they were screaming, and then placing them face-up underneath a running tap, repeating the steps over and over.

"It was teaching them to be afraid of authority," she explained.

Jessop said the other wives in the house were beaten, and the community was one built on control, where the sole duty of women and children was obedience.

When Betty turned eight, five years before the family left, Jessop looked at her daughter and worried about the life she would have.

"I think for me that's when I started having a lot of emotional questions about my faith and my belief -- I just couldn't do to Betty what my mother had done to me, teaching me that polygamy was a natural way to live and it was the only way to God," said Jessop.

"I couldn't imagine what Betty would go through if her life would get worse than mine."

The years that followed her departure were marked by financial hardship and adjustment. It took years of legal fighting before she had full custody of her children, and even longer before therapy helped them adjust to life outside the FLDS.

When Betty turned 18, five years after Jessop fled, she returned to her father.

"Betty was always her father's really special daughter, and when we left and she wasn't with her dad anymore. She felt like she was nobody," said Jessop, who also blamed years of "mind control."

Robert Wickett, a lawyer for the FLDS, later pointed out that Betty has spoken out publicly about life in the church and contradicted the picture her mother has painted.

Wickett noted Betty continues to live with the FLDS.

"As a 20-year-old women, do you respect her decision as an adult to live in the FLDS and to live her beliefs?" asked Wickett

"I have a lot of concerns for her," replied Jessop. "I imagine there's a lot of things that your children do that you have a lot of grief over."

Jessop -- who was calm and composed during hours of testimony, but occasionally choked up when discussing her children -- has become a vocal critic of polygamy. She's written two books and testified at a U.S. Senate committee about her experiences.

Looking back, Jessop blames polygamy for the abuse she suffered.

"For what I experienced, growing up in a polygamous community is a lifestyle very unnatural," she said. "When you live in a way that's incredibly unnatural, then unnatural things happen."

Still, Jessop said polygamy should be decriminalized. She said neither the courts nor the police are enforcing the polygamy law, and she hopes decriminalizing the practice would at least raise the possibility women and children living in polygamy could get help.

"What's happening is children are being born into this, but we don't have the same rights, we don't have any protections," she said.

Despite her feelings about decriminalization, the B.C. and federal governments will be using Jessop's testimony to argue polygamy is inherently harmful and should remain illegal. The FLDS and others will claim stories such as Jessop's are isolated incidents that don't prove multiple marriage inevitably leads to abuse.

The B.C. case was prompted by the community of Bountiful, a polygamous commune in the southeastern part of the province with ties to the FLDS.

Bountiful's leaders, Winston Blackmore and James Oler, were each charged with practising polygamy in 2009, but those charges were later thrown out on technical legal grounds.