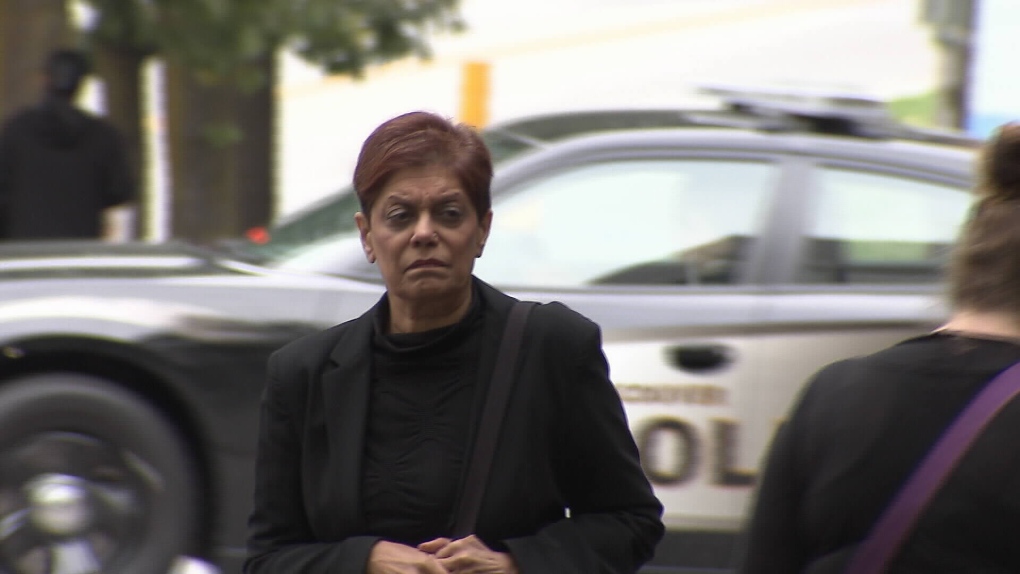 "The clocks cannot be turned back," Rashida Samji told provincial court, saying she deeply regrets the plan she pulled off between 2003 and 2012. "It might sound futile but I am truly sorry for the loss, pain and grief endured by investors."

Samji told judge Gregory Rideout that she prays she will be forgiven for the "the sad and unfortunate situation."

Rideout, who is scheduled to sentence Samji on Wednesday, said the tremors of the Ponzi scheme go beyond the victims and the Society of Notaries Public of B.C.

"The waters do run deeper and they do spread out sphere-like across all sorts of areas in society, which does potentially impact the capital markets in Canada."

Samji was convicted in May of 28 counts of fraud and theft, but the theft charges were stayed and Tuesday's sentencing hearing moved forward with the remaining 14 fraud counts.

Crown lawyer Kevin Marks called for a seven- to eight-year sentence, while defence lawyer Richard Peck said a four- to five-year sentence would be appropriate.

The B.C. Securities Commission found in July 2014 that Samji and two companies she controlled committed over $100 million in fraud.

Marks said Samji's victims included a cousin, a friend she'd known for 40 years, and she even falsely solicited money on behalf of a company that had hired her as a notary, telling investors the Mark Anthony Group was expanding its operations to a winery in South Africa.

"She jeopardized the reputation of the Mark Anthony Group," he said of the woman who was paying investors with their own money instead of up to 12 per cent a year in interest.

"There's no question that this fraud was humongous," Marks said, adding Samji collected investments ranging from $50,000 to $12 million.

Investors lost between $44,000 and $8 million and have suffered physical, emotional and financial hardships, he said.

He said Samji's lies came to light in 2012 when Coast Capital Savings issued an alert saying that a financial planner was promoting a Ponzi scheme involving Samji.

"At some point the merry-go-round will end because it's just a house of cards," Marks said. "In order for the Ponzi scheme to work, more money needs to come in and once that stops, so does the Ponzi scheme."

Marks read from 11 victim impact statements, in which bilked investors wrote about the shame they feel for having trusted Samji.

"At this age and stage of my life it's financially impossible to recover," said retired teacher Amrit Dhaliwal, who invested $460,000 and lost $424,000.

Andreas Manning, who met Samji through a business colleague, lost $8 million of the $12-million-investment he made.

"I feel ashamed and embarrassed for allowing myself to be so gullible," he said.

Marks said that while the defence maintains Samji should not be imprisoned because she has declared bankruptcy and her 90-year-old father is dependent on her, her sentence should reflect the losses suffered by her victims.

He said Samji's breast cancer and depression before the fraud, as outlined by her lawyer, should not factor into the sentencing decision.

"At the end of the day, how did this have any connection to the crime committed by Ms. Samji?"

While Samji's lawyer said his client did not profit from the scheme nor live a lavish lifestyle, Marks characterized her lifestyle as affluent, saying people only start Ponzi schemes to benefit from them.