A Vancouver real estate agent headed to China to pitch high-priced homes to offshore buyers is being accused of forcing up prices for locals, but he insists he’s just looking out for his clients.

Realtor Mark Wiens is joining a team of three other local Macdonald Realty agents in Shanghai for the Luxury Property Showcase this weekend, full of well-heeled Chinese buyers looking to spend big.

The event showcases properties over $2.5-million, which in the Vancouver market, can mean even modest homes on the city’s West Side.

“You will have some properties that are showcased there that are on a 33 by 120 lot on the West Side of Vancouver [and] you'll have castles from France,” Wiens said, adding that he believes he and his coworkers will be the only B.C. brokerage firm represented at the event.

In the lead up to the event, Wiens sent marketing flyers to thousands of West Side homes, offering to market their properties to deep-pocketed buyers.

“As a Caucasian, Chinese speaking realtor born in Vancouver, I’ll be able to uniquely market your home to an invitation-only audience of 5,000 VIP luxury buyers in China,” it reads.

More than one-third of attendees at last year’s showcase have an income of over $600,000 USD and 31 per cent are interested in purchasing real estate in Vancouver, the flyer proclaims.

“These buyers may be willing to pay you a premium for your home. Opportunities like this come only once per year,” it reads.

But the strategy of targeting foreigners in an already-overvalued market is causing controversy. Online criticism ranges from frustration at the lack of government regulation on foreign ownership to the accusation that Wiens is helping make Vancouver unaffordable.

@PennyDaflos @BulletWolf @CTVVancouver Doesn't matter if a speculator's from Sudbury or Shanghai, market games with a vital need, sucks.

But Wiens believes he is helping Vancouver home owners, by getting them top dollar when selling their home.

“Our mission is to do the absolute best we can for our clients, and that's to expose their properties to as many buyers are possible,” he said.

“If a seller doesn’t want to sell to somebody they don’t have to. They know where the offers are coming from.” 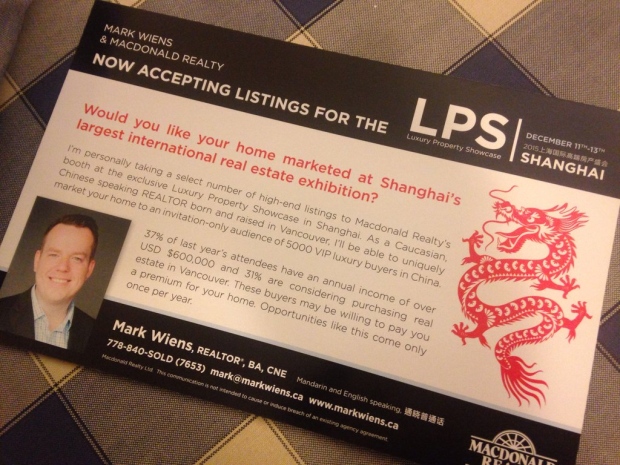