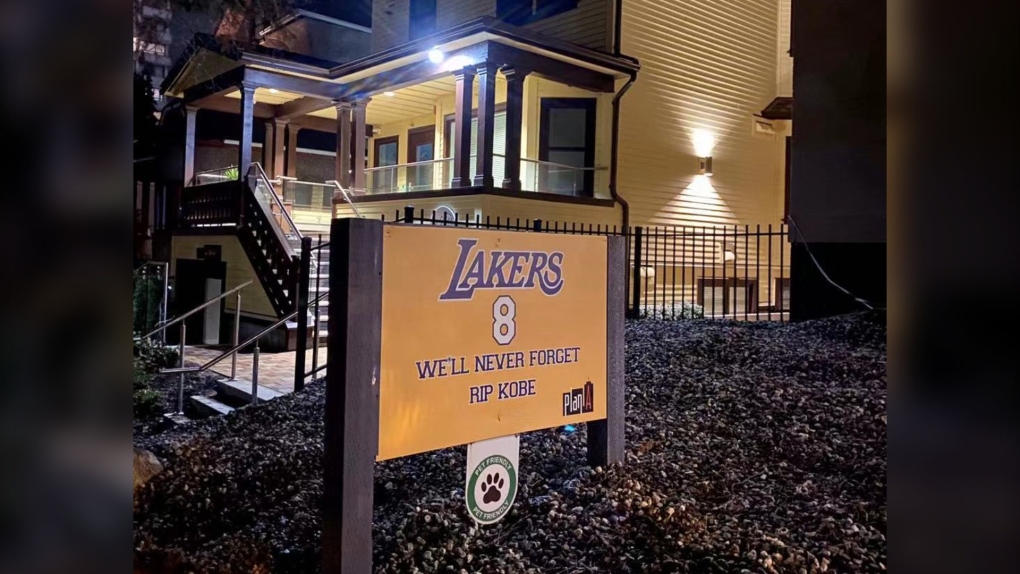 VANCOUVER -- Like many basketball fans, Anoop Majithia was shocked and saddened by the sudden death of NBA legend Kobe Bryant in a helicopter crash last weekend.

Unlike many basketball fans, Majithia had a highly visible way to express his mourning publicly.

"I didn't really see any public displays of respect to him in the city," Majithia said. "You know, since I have these buildings, my wife and I had the idea that this is something we could do to kind of express something that a lot of people are probably feeling that isn't being expressed in the city."

Majithia is the owner of Plan A Real Estate Services, Ltd. Earlier this week, he commissioned signs bearing Bryant's jersey numbers - eight and 24 - and the logo of the Los Angeles Lakers, for whom the basketball star played for 20 seasons, winning five championships and earning countless accolades.

"I was a big fan of Kobe Bryant and really admired his work-ethic, his attention to his craft, his commitment to success, and I really tried to embody some of those values into my own work," Majithia told CTV News Vancouver.

At least one resident seemed to take issue with this characterization, however.

On Wednesday, photos posted on Reddit showed a paper sign that had been affixed to the Bryant tribute outside Plan A's building at 1540 Haro St.

Another piece of paper listed some of the specific areas apparently in need of fixing, in the eyes of the tenant, among them doors, floors, showers, windows and mould.

West End tenants not fans of Kobe tribute from r/vancouver

Reddit users chimed in to claim they had lived in the building, or others managed by Plan A, claiming to have had similarly negative experiences.

Majithia told CTV News Vancouver he has seen the paper signs and the posts on Reddit, and he takes issue with the criticism.

"Personally, I think that's a very inappropriate way to express concerns about a building," he said, referring to the paper signs. "All of the tenants know how to contact us."

As for the broader complaints about the condition of the building, he noted that it was built in the 1950s and is in need of upgrades.

"We're in the process of rehabilitating it, as we do a lot of our buildings," he said. "In an older building, there's going to be issues that arise."

"That's just the nature of the business," he continued. "We do our best to respond to these things in as reasonable a way as possible, but when someone rents a unit, it's no secret that they're renting a unit in a building that's 65 years old. And that's reflected in the rent they pay. They're not paying for a luxury condo at Trump tower or Vancouver House, they're paying a rent that's commensurate with what they're renting."

Majithia said new windows for the building at 1540 Haro St. have been ordered, but installing them is a much longer and more expensive process than putting up a few signs as a tribute to a recently deceased athlete.

Making repairs to the building and honouring Kobe Bryant's legacy are not a zero-sum game, he said.

Majithia said he believes the paper with the complaints on it came from a single tenant. None of the other seven Kobe Bryant tributes he posted have had such signs attached to them, he said, though he noted that he had to take one down because someone wrote the word "rapist" across it in marker, an apparent reference to the accusation that led to Bryant's arrest in 2003.

Prosecutors dropped the case against him in 2004, after his accuser decided not to testify at the trial. She filed a separate civil suit that was settled out of court.

"I would hope I would be correct in saying that that doesn't represent the general way that people in the West End and Vancouver feel about Kobe Bryant; that that's an isolated response of someone who's looking for something negative," Majithia said.

"For whatever their reasons are, they're looking for that five per cent of the glass that's empty," he added. "I think that I would draw the same comparison to that sign that the tenant put on the building. You can either say, 'Oh, does that represent the way all these tenants feel?' or you can say, 'Well, the building's fully occupied, and it wouldn't be if this truly represented the truth of the way this is run."