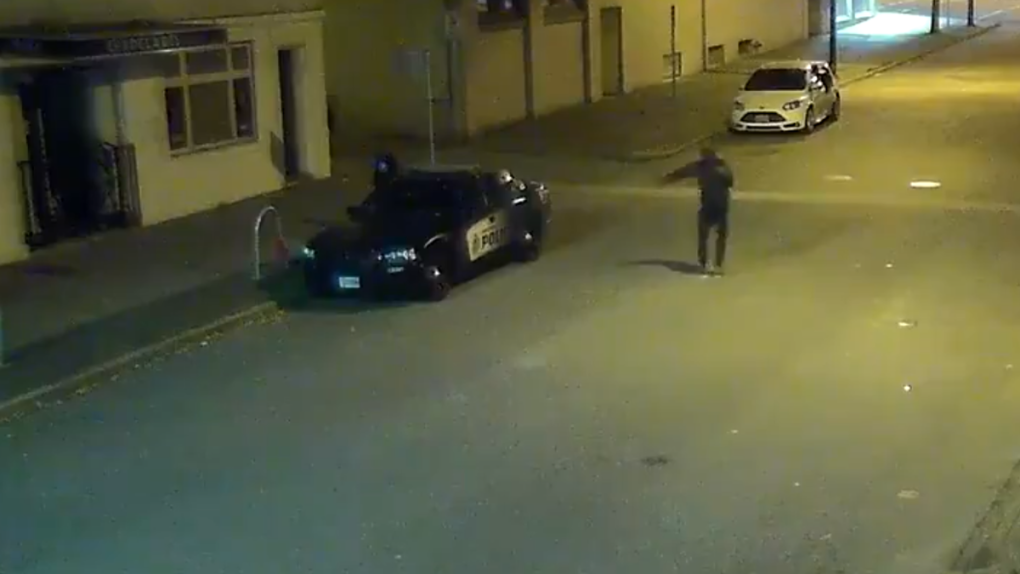 A still image from surveillance video shows a suspect alleged to have vandalized a Vancouver police cruiser on Sept. 30, 2019. (Twitter / Vancouver Police Department)

VANCOUVER - Police are searching for a suspect after someone vandalized a marked cruiser in downtown Vancouver earlier this week.

In a message posted on Twitter, the department said it was looking for witnesses after the patrol car was damaged on Monday. Officers have not said exactly what the person did to the car.

The car had been parked on Dunlevy Avenue shortly after midnight, the Vancouver Police Department said.

The VPD posted a video of the incident, in which a person can be seen crossing the street to reach the vehicle.

As they walk toward the car, their arm goes up in a punching or throwing motion, but is quickly brought down again before they reach the vehicle. The person then crouches near the front, driver's side tire.

He or she then stands up and runs out of frame.

Another camera captured the person running across a crosswalk.

No description has been provided of the suspect, but officers said they were seen running toward Oppenheimer Park following the incident.

Vancouver Police are looking for witnesses after a patrol car was vandalized on Dunlevy Avenue shortly after midnight on September 30. Suspect was last seen running towards Oppenheimer Park. Anyone with information should call the police at 604-717-3321. #VPD pic.twitter.com/UUxAZZ5wBB