Smoky skies blocked out Vancouver's mountain views on Friday as residents of the region experienced the worst air quality of all major cities in the world.

According to an air quality website, the air in the Vancouver area was worse on Friday afternoon than in any of the other cities it monitors.

An interactive map of the region's air quality on AirIQ's website suggested the quality differed across Metro Vancouver, with some of the worst air quality noted in Burnaby and New Westminster.

Areas closer to the coastline had significantly lower AQI numbers.

Even in the City of Vancouver itself, values varied. A reading taken on Gravely Street near Commercial Drive in East Vancouver had a score of 210, while the AQI on West 14th Avenue near Oak Street was just 72.

Toronto, the only other Canadian city on the list of 94, came in 19th overall with an AQI of 76. 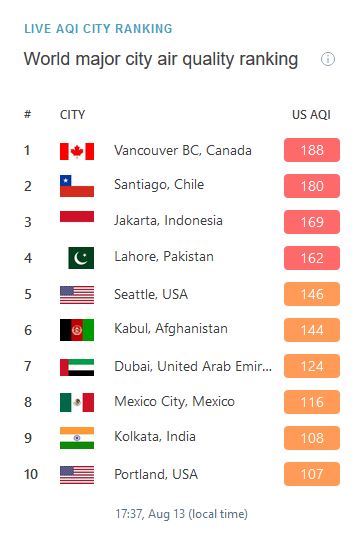 IQAir called Vancouver's air pollution "unhealthy," saying it was 12 times above the exposure level recommended by the World Health Organization.

The main pollutant in the region's air as of the update was PM2.5, or fine particulate matter. The name refers to airborne solid or liquid particles with a diameter of 2.5 micrometres or less, an air quality advisor from Metro Vancouver officials explained.

Because of its size, it can easily penetrate indoors, the region said in its advisory, which is also in place for the Fraser Valley.

The high concentration of PM2.5 is expected to continue through at least Saturday, the region said.

The air quality plummeted in the region as wind pushed in smoke from the wildfires burning both in B.C. and south of the border in Washington.

Video from CTV News Vancouver's drone showed the smoke was thick enough to reduce visibility, blocking out mountain views in some areas.

Until the air quality improves, those with chronic underlying medical conditions or infections including COVID-19 should try to reduce time outdoors.

According to Metro Vancouver, exposure is a concern especially for people with lung or heart disease, asthma and other conditions, as well as older adults.

At the same time, B.C. is experiencing another heat wave.

The City of Vancouver opted for the first time ever to open its cooling centres overnight after health officials raised a weather warning to Level 2, declaring an extreme heat alert.

According to a meteorologist, wildfire smoke can be a bit of a wildcard. Thick smoke can reduce temperatures by as much as 10 degrees, Armel Castellan told CTV News.