Under quarantine, SPCA asks for help to care for 66 seized dogs

B.C.’s animal welfare agency is appealing to the public for help after one of the largest-ever puppy mill busts in the province.

The BC SPCA seized 66 ill and malnourished dogs last week from a Langley breeder after executing a warrant at the rural property.

The breeder is accused of running a sophisticated puppy mill operation where dogs were kept in “deplorable” conditions – and the “designer” and purebred puppies were sold for thousands of dollars through online buy and sell sites like Kijiji.

“These people were in it to make money and had very little, if any, regard to the dogs’ welfare,” SPCA Chief Enforcement Officer Marcie Moriarty told CTV Morning Live.

“To properly care for 66 dogs requires an army, and that clearly wasn’t happening in this case.”

The seizure has overwhelmed the Vancouver shelter, which had to transfer most of its dogs and cats out to other branches to focus on caring for the dozens of newcomers.

To complicate matters, the shelter has been put under quarantine because some of the dogs have been diagnosed with contagious pathogens, including ringworm, roundworm and giardia.

The seized canines came in with various issues, including matted fur, dental disease, infections, abscesses, overgrown nails, and worse – missing eyes and ears and broken limbs. After undergoing a vet visit, and in some cases surgery, they’re now being set up on long-term care plans.

Beyond overcoming the physical issues, many puppy mill survivors suffer psychological problems – and have long-term medical and socialization issues.

Many of the seized dogs were housed in a dark and unheated building, with little, if any, human contact and social interaction.

“Many have been living in travel creates, that you or I might take our pet on an airplane, and that’s where they were living,” she said.

“That has ramifications not only for the breeding moms and dads, but for the puppies too.”

In the short term, the shelter is asking for cash donations to help cover the mounting medical bills. It’s also in need of pet supplies, including:

Moriarty is urging the public to educate themselves about puppy mills, and how to spot an unscrupulous breeder.

“That’s the biggest help that the public can do right now – to make sure they’re not continuing to buy from bad breeders,” she said.

The dogs will eventually be re-homed, but Moriarty said some of the puppy mill survivors may experience long-term issues.

“But with the right help and love they’ll do well,” she said.

Donations can be dropped off at the Vancouver SPCA shelter at 1205 East 7th Avenue. 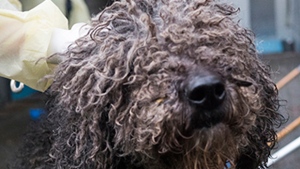