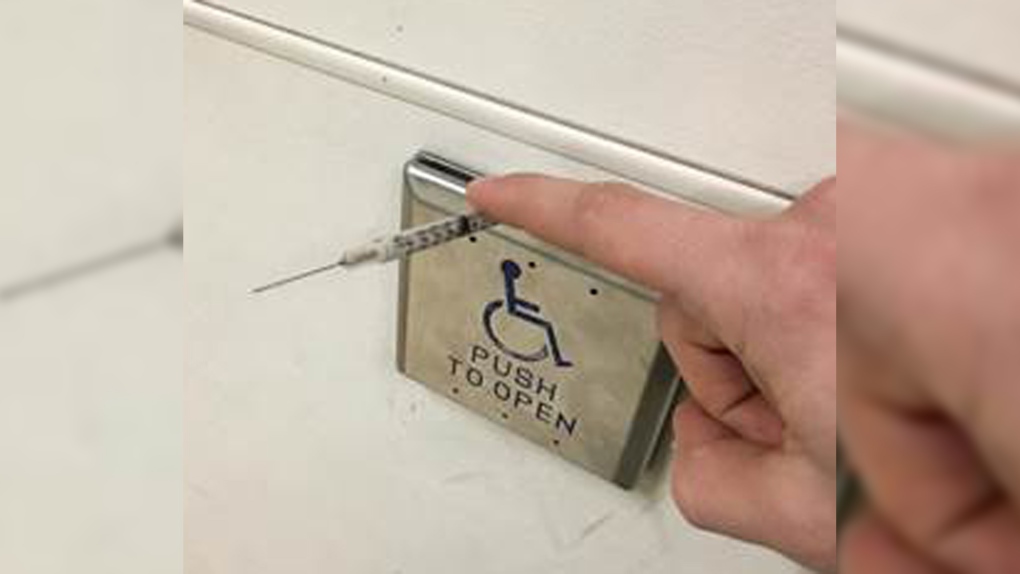 Paramedic Will Rogers posted this photo to Facebook recreating what it looked like when responders discovered an uncapped syringes on an automatic door opener on Vancouver's Downtown Eastside.

A B.C. paramedic is warning Vancouverites after responders discovered a hypodermic needle that appeared to have been intentionally placed near an automated door opener in the city's Downtown Eastside.

"We had a near miss today that I would like to bring to everyone's attention," a paramedic wrote on Facebook Monday. "A syringe was intentionally manipulated (bent) so that the exposed sharp was sticking out, with the obvious intention to poke anyone reaching for the button."

Paramedics were called to the Lux Hotel on East Hastings Street near Columbia Street at around 7:20 a.m. Monday when they saw the exposed needle.

BC Emergency Health Services said the paramedics safely disposed of the syringe then called the Vancouver Police Department.

VPD Const. Jason Doucette said officers investigated but weren't able to find a suspect, video of the incident or any witnesses.

BCEHS said incidents like this are unusual, but all of its staff are trained to handle a variety of hazards they might encounter in the field.

Similar incidents have been reported in other parts of the province.

In January, a toddler was pricked by a syringe at a McDonald's restaurant in downtown Victoria.

The next day, a Victoria woman was pricked by an uncapped syringe sticking straight up out of a planter, prompting an emergency meeting about the dangers of used needles in the city.

Uncapped syringes have all been discovered on stair railings, parking ticket dispensers and in car tires.