Uber, Lyft are now operating in Metro Vancouver. Here's what you should know.

VANCOUVER -- Uber and Lyft began operating in parts of Metro Vancouver Friday, about 24 hours after getting approval from the Passenger Transportation Board.

Both ride-hailing companies turned on their apps at about 8 a.m. in Vancouver, which is the only city they had business licences for at that time.

"Good news, the wait for Uber is over! Uber will launch today to connect riders with reliable and affordable rides in Metro Vancouver," Uber said in a news release Friday morning. "Residents and visitors alike will now have more transportation options to get them to their destination."

"We are very excited to bring Lyft's ride sharing service to British Columbia," Lyft B.C.'s general manager, Peter Lukomskyj said. "We want to thank the provincial government, we want to thank the PTB … for all their dedication in putting together the frameworks and executing those frameworks to make all this possible."

Both companies charge 33 cents per minute, but Uber's per-kilometre rate is 70 cents, while Lyft's is 65 cents. Base and services fees for Uber are $4.50 compared with Lyft's $5.

Where are rides available?

To start off, Lyft is limiting its operations to what it's calling the "core" of Vancouver, which is defined by boundaries at Dunbar to the west, Victoria Drive to the east and 41st Avenue in the south. It'll also offer rides to Vancouver International Airport and the PNE.

"What we're doing today is matching our operating region with the number of drivers that we have on the platform," Lukomskyj said.

"What we want to do is expand that region as quickly as possible as soon as we have enough drivers on the platform that we feel that we can meet those high-level standards of low wait times for our passengers and keeping our drivers as busy as possible."

On its website, Uber shows a wider operating radius than Lyft, but the ride hailing company doesn't have business licences secured outside Vancouver yet. For the time being, however, Uber will operate throughout the entire city of Vancouver, with no restrictions. 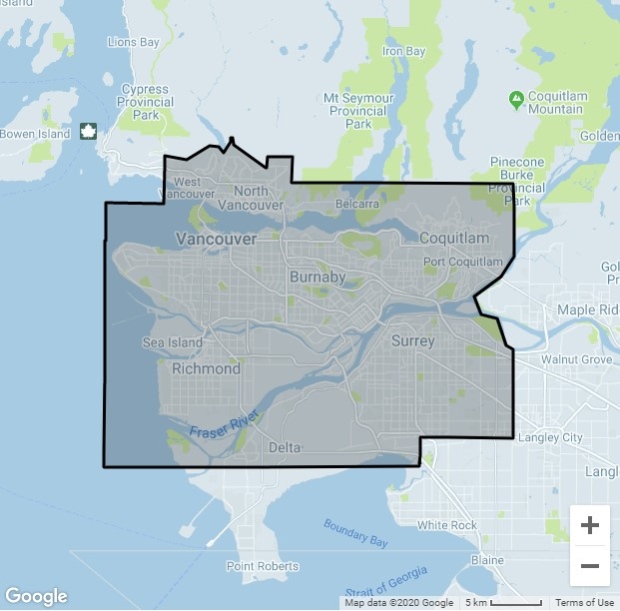 For those using ride sharing at YVR, only three pick up areas can be used: international arrivals, domestic arrivals and the south terminal. Passengers can be dropped off anywhere at the airport, however.

'Be patient with the service'

What's still unclear is how many drivers have been able to sign up with the businesses so far, as the PTB requires that all ride hail drivers have a Class 4 licence

"We do know that the Class 4 licence requirement does make it more difficult for driers to get through the process," Michael van Hemmen, Uber's head of Western Canada, said.

"And so we ask for people to be patient with the service at first as there will be a period of time that it will take to adjust to the system."

BREAKING: @Uber now says they’ve moved up their launch to 8am but the app is now active. Looks like taxi rates! Details here: https://t.co/NRZpbbFof4 @CTVVancouver pic.twitter.com/Jt1VrY9wM6

B.C.'s government introduced ride hailing legislation last year, but it still took months for companies to get operational approval from the PTB.

Claire Trevena, the transportation minister, told reporters in November that she was "very confident" ride hailing would be in place by Christmas.

Then in December, just days before Christmas, CTV News received a statement from Trevena echoing those same words.

By New Year's Eve, only one ride-hailing company – which plans to mostly operate in resort towns like Whistler – had received approval from the PTB.