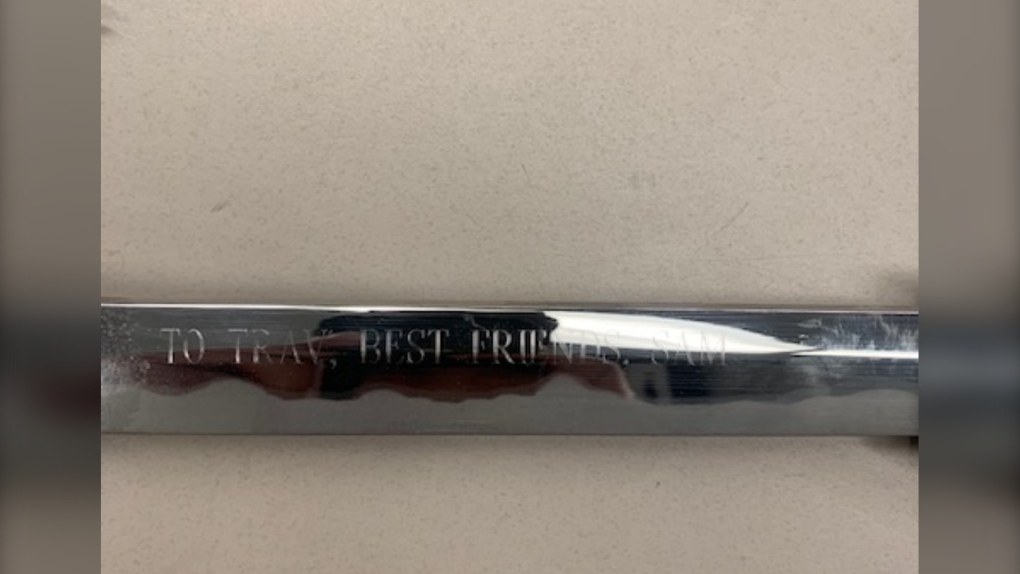 The sword was found in the 6000 block of Balmoral Street, between Colborne and Sperling avenues, on June 25. (Burnaby RCMP)

Mounties in Burnaby say two unusual items in their possession have not been claimed by the public after more than a month.

On June 20, officers seized a collection of Canadian and foreign currency from a suspect in a theft at a business in the 3700 block of Lougheed Highway, not far from Boundary Road and Gilmore SkyTrain station.

Five days later, a member of the public walked into a Burnaby RCMP Community Police Office and turned in a samurai sword she had found in the 6000 block of Balmoral Street, between Colborne and Sperling avenues. The sword is engraved with the message: "TO TRAV, BEST FRIENDS. SAM"

After a month without identifying the owners of the sword or the coins and banknotes, Burnaby RCMP issued a press release on July 25, asking anyone who might be able to help locate the owners of the items to get in touch with them.

To date, no one has come forward, police said Friday.

If their owners cannot be found, the items face different futures. The sword is considered found property, which is typically held for 90 days and then destroyed if no one claims it, police said.

Because the currency collection was recovered as part of a criminal investigation, it could be considered evidence relevant to the crime. Even if it's not directly related to the crime in which it was seized, property that is recovered in this way is typically held for a longer period of time than found property, police said.

If no one claims the currency collection, it will eventually become part of a police auction.

Anyone who has information that could assist police in locating the owners of the sword and the currency is asked to contact Burnaby RCMP at 604-646-9999.