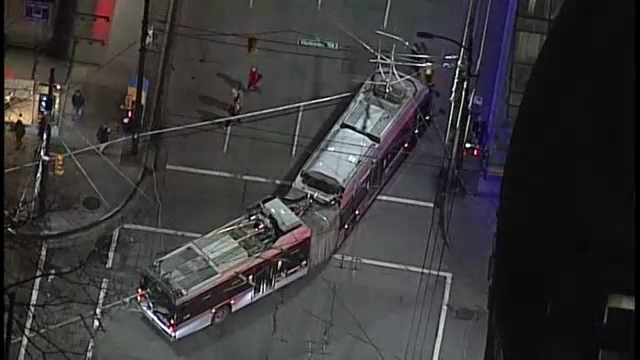 TransLink said a bus brought down some trolley wires near Seymour and Robson Streets, but repairs won't be done until Friday morning because of the union's ban on maintenance overtime.

VANCOUVER – Traffic was snarled in downtown Vancouver during the evening rush hour Thursday, with delays potentially persisting overnight and into the morning.

TransLink said a bus brought some wires down near Seymour and Robson streets, and a dark-coloured SUV could also be seen behind yellow tape and traffic cones near that intersection.

"Crews on scene have made the area safe and traffic can soon flow, but the repairs won’t be made until tomorrow due to the union’s ban on maintenance overtime," said TransLink spokesperson Jill Drews in an email Thursday night. "Buses will be on detour around it until the repairs are complete."

TransLink said on Twitter that several bus routes in the area are detouring because of a trolley wire incident, including the 17 and the 20. Riders are being encouraged to check the TransLink alerts page for the exact rerouting of the buses.