VANCOUVER -- As they’ve been digesting the implications in the steps the premier announced in reopening B.C.’s economy, some residents have come to the conclusion they’re too much too soon, but overall they’re in favour of the plan — which the provincial health officer insists is a voluntary timeline.

John Horgan revealed the “Phase 2” reopening guidelines on Wednesday, and the next day, marketing researcher Insights West surveyed 747 B.C. residents and found that while 79 per cent supported the plans for a gradual reopening of the provincial economy, 41 per cent believe it’s a little or very fast; 46 per cent found it "about right."

"We are relying on our leaders to make the right decisions, and (respondents) are making an endorsement to say 'it’s ok to slow down, it’s ok to do this in phases' and 'there’s no hurry here' and the public is clearly behind that," said Insights West president Steve Mossop.

While the vast majority supported mid-May resumption of health services like dentistry and physiotherapy, they were fairly evenly divided on whether to reopen dine-in options at restaurants, schools and the return to personal services like salons and barber shops. 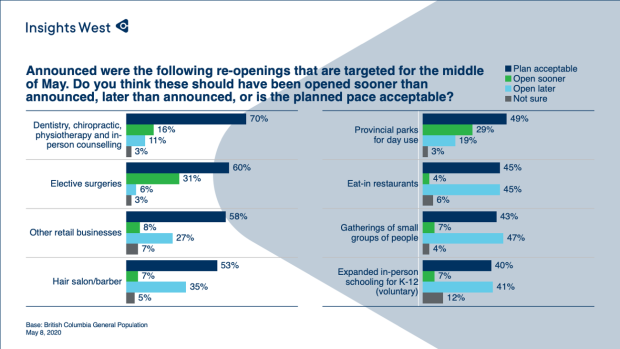 CTV News spoke with a number of hairdressers who all expressed dismay at the idea of going back to work without clarity on how to keep their clients and themselves safe, repeatedly telling us "it’s too soon."

She started a petition urging the government not to force them back to work. Rae expected a few hundred signatures, but as of Friday afternoon it had surpassed 10,000.

"We’re not an essential service…there are some that have extreme anxiety — if I choose to stay at home because I don’t feel safe yet, will I lose my job? Will I lose my clients?" said Rae. "It’s very serious what’s happening now and we don’t feel heard or respected by our government."

Lawyers say many of the implications for both workers and employers are still unknown.

But Dr. Bonnie Henry wants all British Columbians to know that no one is being compelled or expected to reopen on a certain day or even within a given timeframe.

"We need to have a slow and thoughtful reset. We do not want to undo all that we have done — and even as we shift into this next phase, not everyone will be ready to increase their social connection or to restart their businesses at the same time," the provincial health officer said. "We don't expect that one day all of a sudden everything will be opening and back to normal. Just because it's allowed, as well, doesn't mean that everyone must or should change what they're doing now."