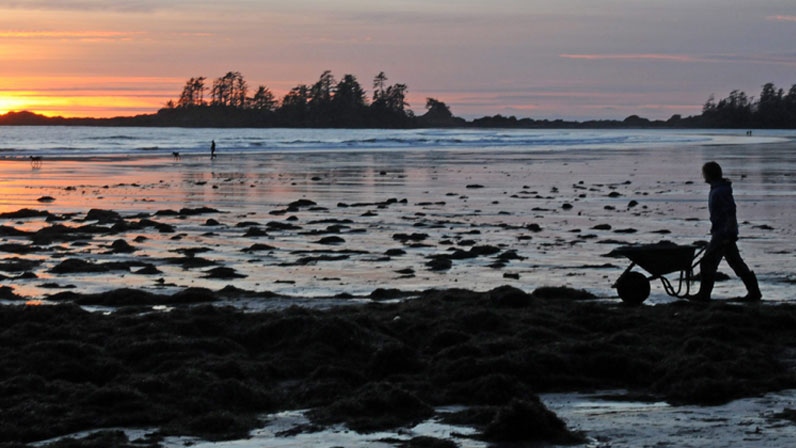 A Tofino resident picks up seaweed with a wheelbarrow on South Chesterman Beach in Tofino, B.C. as the sun sets on Thursday, Dec. 30, 2010. THE CANADIAN PRESS/Keven Drews

VANCOUVER - A group representing hundreds of businesses in the Vancouver Island tourism mecca of Tofino, B.C., is criticizing the BC Chamber of Commerce for its stand on the Northern Gateway pipeline project.

Earlier this month, the BC Chamber of Commerce released the results of a poll that found 47 per cent of British Columbians support the pipeline that would carry bitumen from Alberta's oilsands to the West Coast.

It also released a letter that declared its "strong support" for the oil pipeline back in August.

But Gord Johns of the Tofino-Long Beach Chamber of Commerce says the provincial organization doesn't speak for his more than 300 members who rely on clean and healthy oceans to survive.

He says his west coast of Vancouver Island community experienced an oil spill back in December 1988, and his chamber doesn't endorse a project that increases the risk to habitat.

Fuel from an 850,000 litre spill in Grays Harbour, Wash., made its way north to Vancouver Island back in 1988, fouled beaches, killed thousands of seabirds and closed commercial shellfish operations.