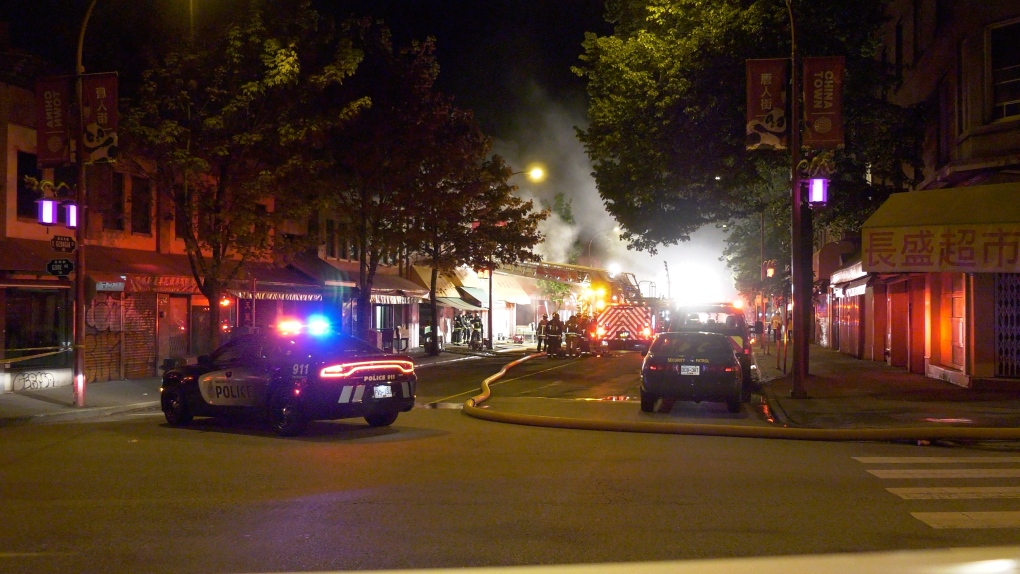 Firefighters respond to an early morning blaze in Vancouver's Chinatown neighbourhood on Tuesday, May 5, 2019.

A building was damaged after a fire broke out in Vancouver's Chinatown neighbourhood early Tuesday morning.

Fire crews arrived at Tin Lee Supermarket on East Georgia Street to find flames at the rear of the building shortly after 1 a.m.

Firefighters battled thick and heavy smoke conditions, which spread from the bottom of the building to an upstairs area.

"Right away the guys made it a working fire. We got a lot of smoke showing on the second and third floor. Quickly upgraded it from a working fire to a second alarm, and a little bit later, a third alarm fire," said Asst. Chief Richard Warnock with Vancouver Fire and Rescue Services.

According to Warnock, two people who live next door have been displaced due to smoke in their building. They are currently being cared for by emergency social services.

"Just a stubborn fire with a old building, large amounts of open space upstairs, so dealing with a lot of smoke, and a lot of ventilation problems in the beginning,” Warnock added.

Warnock also said that the produce inside Tin Lee Supermarket will need to be inspected by a health official before being sold due to the exposure of the smoke from the fire.

There were no reported injuries, and no one was inside the building at the time of the fire.

Up to 17 fire apparatus and 50 firefighters responded, and a fire investigator will be attending the scene to determine the cause of the fire.

A third alarm fire has damaged a produce store in Chinatown early this morning. @VanFireRescue had up to 50 firefighters battle the blaze which may have started in the rear of the building. @IAFF18. Details on @CTVMorningLive & @CTVVancouver pic.twitter.com/mfm8nlkYu5