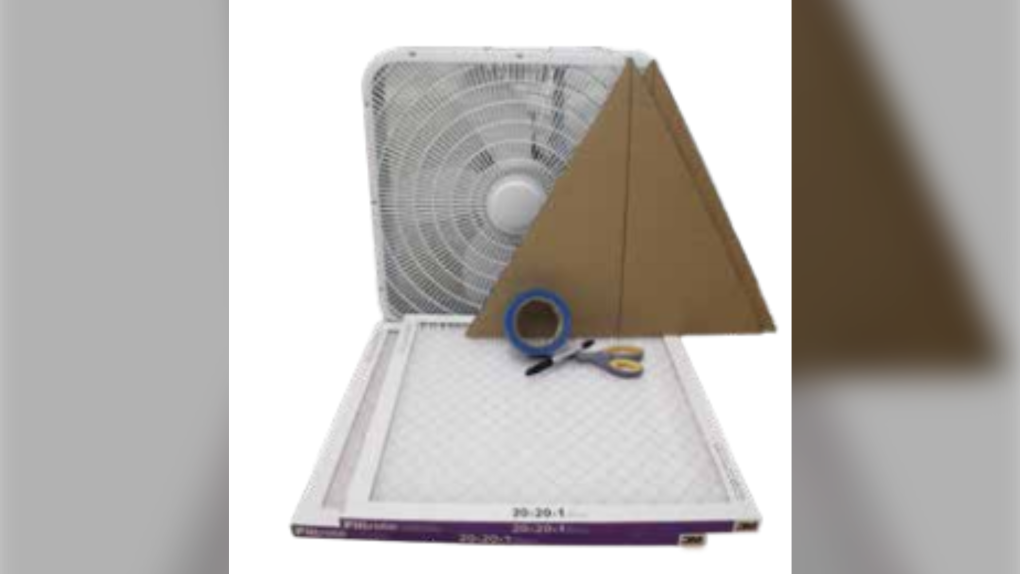 The materials needed to make a DIY air purifier, according to the BCCDC's step-by-step instructions. (Supplied photo)
Vancouver -

Environmental health experts are urging people to be cautious around wildfire smoke and to get an air purifier for their homes, or make their own.

Sarah Henderson, director of environmental health services at the BCCDC, spoke to CTV News Morning Live Tuesday and said that the long-term impacts of wildfire smoke inhalation are not yet fully known.

“This is an area of really active research but we don’t know too much yet,” she said.

Wildfire smoke contains fine particles that, when inhaled, can cause irritation and inflammation, Henderson said. It can be especially dangerous to people with chronic lung issues such as COPD, asthma, diabetes and other heart conditions, as well as young people and pregnant people.

“Most of us spend most of our time indoors and if we can keep the indoor air cleaner, we're going a long way to protecting ourselves,” she said.

The warning comes as 318 wildfires burn across B.C., and as several regions in the southeast of the province are under air quality advisories.

When wildfire smoke sets in and your region is under an air quality advisory, Henderson recommends closing windows if it’s safe to do so, and turning on an air purifier, and placing it in a select room of your home (air purifiers typically aren’t effective enough to clean the air in an entire home or apartment).

If you don’t have a portable air purifier, the BCCDC has provided a step-by-step guide on how to create your own, and it will cost you about $60. The materials needed include a standard box fan (about $20), two 20" by 20" furnace filters rated at MERV 13 or higher ($20 each), some cardboard, tape and scissors.

Henderson also advises against strenuous exercise outdoors if there’s an air quality advisory in place, and the BCCDC has a handy guide for how to adjust your activities based on the air quality in your region.

“If you're exercising outdoors you might be breathing in 10 times more smoke than you would be if you're resting outdoors,” she said.

July 13: This article has been updated from an earlier version to correct the number of wildfires currently burning in the province.