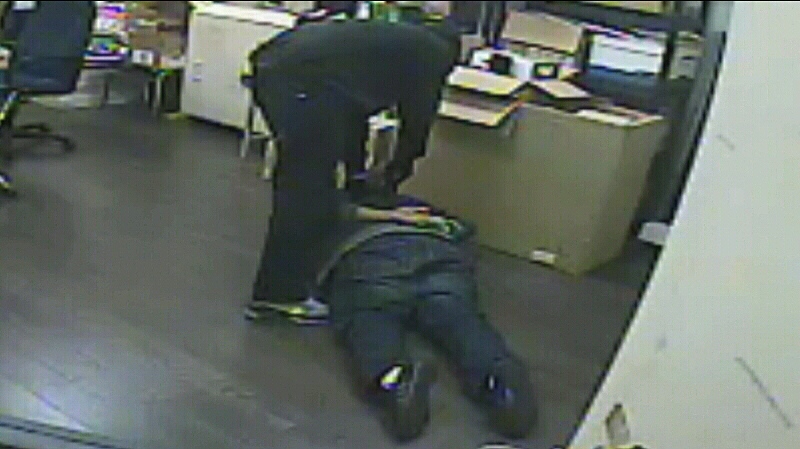 A suspect is seen holding down an employee of a Surrey Wireless World in this undated surveillance footage. (Handout)

A Surrey business owner is asking for the public’s help identifying suspects in multiple cell phone store robberies that were all caught on camera.

Surrey RCMP confirmed Saturday they are investigating a series of three robberies that each targeted cell phone retailers. Police said they’ve also confirmed that one of the suspects shown in surveillance footage was involved in all three incidents.

Narrinder Jaswal said he feared for his life as armed men burst into Wireless World, a Fido dealership at 128 Street and 96 Avenue.

“The gun never left their hand,” Jaswal told CTV News. “It was always on the back of my head. He told me, ‘Hey, don’t make any sudden moves or you’re going to get popped in the head.’”

Jaswal said the thieves forced him to unlock a cabinet containing merchandise. The suspects then reportedly tied Jaswal up in a back room as they made off with thousands of dollars’ worth of pricey smartphones.

“When I was laying down facing the ground, I was just, I hope these guys take whatever they want and leave me the hell alone,” he said. “You don’t want to go to a workplace in broad daylight and have to worry about getting killed.”

The store’s owner confirmed that a second and third robbery took place at a Wireless World location just five minutes away at 128 Street and 84 Avenue.

In the first incident, staff was threatened with a machete and other weapons before being tied up.

“They just took all the phones. They made us turn toward the wall and tied our legs and hands and just got everything,” employee Vijay Ahuja said. “We were really scared.”

Rob Riarh, who owns two dozen locations in B.C. and Alberta, said his Surrey stores have the most problems – with $70,000 worth of merchandise being stolen so far.

Retailers aren’t the only ones dealing with the robberies. Some of the stolen smartphones are often listed for sale on websites like Craiglist and Kijiji to unsuspecting buyers.

“They buy the phones and then within a few days, we block the IMEI’s and they can’t activate the phones,” Riarh said.

Once the phone is reported stolen, the seller is usually long-gone with the buyer out hundreds of dollars, according to Riarh.

Victims of the robberies said they’re asking for more support from police and legislators when it comes to combating violent crime.

“I don’t think anybody’s going to do anything until someone does get killed,” Jaswal said. “They’re not using little toy guns. They’re using Tasers, they’re using real guns. We don’t know what they’re going to do.”

Surrey RCMP called the robberies a “top priority” and said they have received several tips in the investigation.

Riarh is taking matters into his own hands by offering a $5,000 reward to anyone who recognizes the suspects in the videos – and gives information leading to their arrests.