These 3 gondola routes to Burnaby Mountain will soon be up for public discussion: TransLink 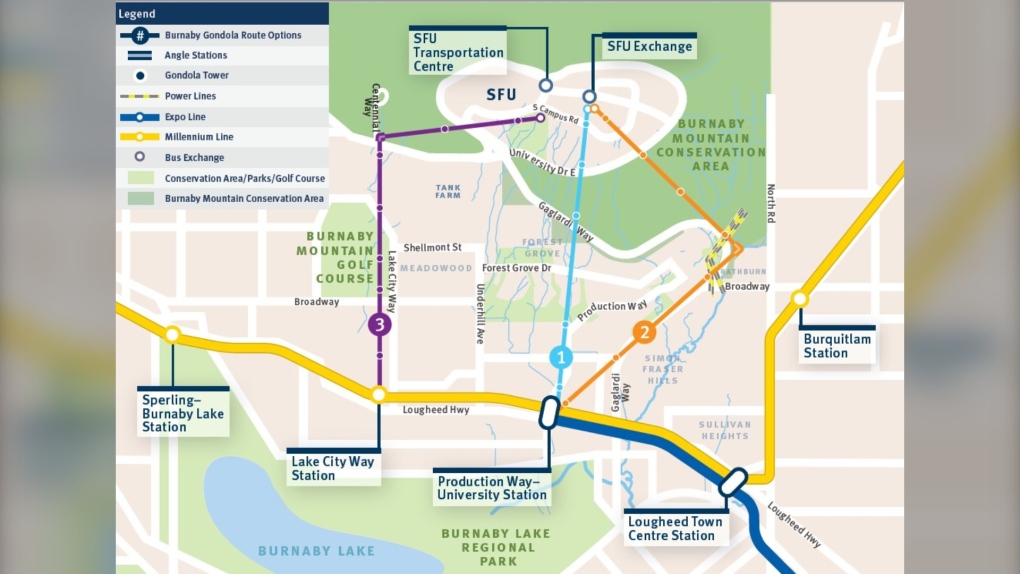 Three proposed routes for a gondola up Burnaby Mountain. (TransLink)

VANCOUVER -- Three gondola routes up Burnaby Mountain will be up for discussion starting Tuesday, as TransLink seeks feedback on a project it's been floating for years.

The idea was included in a 10-year vision for the region's transportation system in 2014, with TransLink noting that a high-capacity connection between the mountain and a nearby SkyTrain station might be needed as ridership increases.

But the project was delayed and re-examined for years, even nearly being scrapped last year, before Burnaby city council gave the gondola the green light.

Now, TransLink is asking for feedback on its three proposed routes up the mountain.

"We are working closely with the City of Burnaby and Simon Fraser University," said Jeffrey Busby, project director, in a news release issued Monday.

"During the first half of 2020, we completed technical work to help inform our engagement with stakeholders, the public and Indigenous groups. This work helped us to understand conditions in the corridors, develop conceptual designs for three proposed alignments, and update key information, such as ridership, cost, and benefits."

The three proposed routes are:

If built, the gondola is expected to provide service between SkyTrain and Burnaby Mountain, with an estimated 25,000 trips made by SFU students, staff, faculty and other residents.

"Gondola cabins would depart every minute, carrying more people up the mountain per hour than current bus services and in about half the time," the news release from TransLink says.

"Gondolas are safe, smart and cost-effective, operating in all kinds of weather and free from the constraints of the road."

Public consultation takes through an online survey from Sept. 1 to 30. The project is not yet approved or funded.