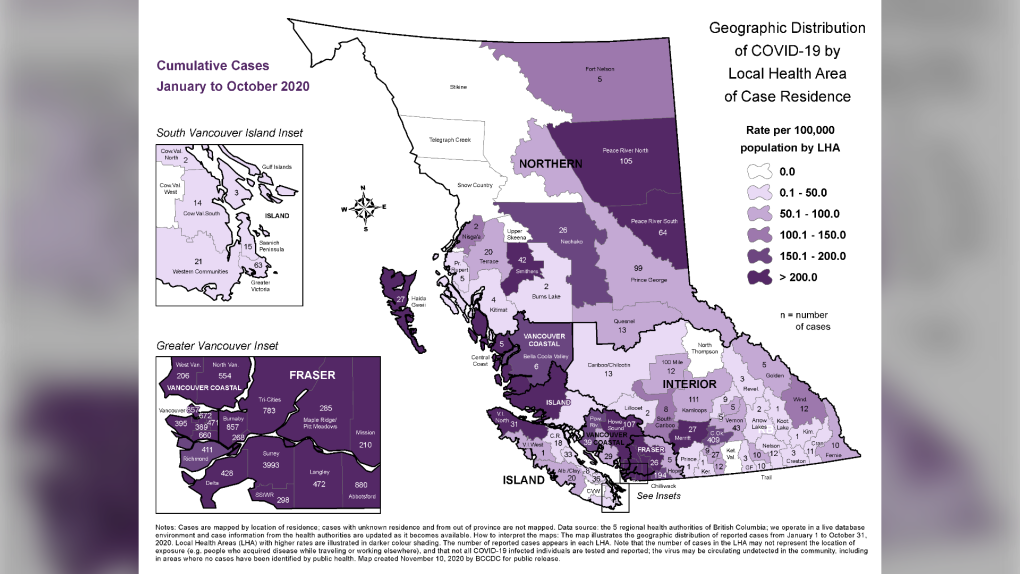 Alongside its update on modelling of the COVID-19 pandemic Thursday, the B.C. Centre for Disease Control released new, monthly subregional data on coronavirus cases in the province. (BCCDC)

VANCOUVER -- Alongside its update on modelling of the COVID-19 pandemic Thursday, the B.C. Centre for Disease Control released new, monthly subregional data on coronavirus cases in the province.

The revised map shows both the total number of cases and the number of cases per 100,000 residents recorded in each of British Columbia's "local health areas" from Jan.1 to the end of October.

The data shows the City of Surrey as the site of the largest raw number of COVID-19 cases since the pandemic began, with 3,993 cases in the local health area that includes most of the city's population. An additional 298 cases have been detected in the South Surrey/White Rock local health area, though the BCCDC does not specify to which municipality those cases correspond.

B.C.'s largest city has recorded the next-highest case total, with 3,444 cases in Vancouver as of Oct. 31.

Within the City of Vancouver - which is subdivided into several local health areas - downtown has seen the most cases (857).

That said, every region of the city has recorded more than 200 cases per 100,000 residents, the highest concentration shown on the colour-coded map.

Indeed, every local health area in Metro Vancouver is shaded in the dark-purple hue that indicates 200-plus cases per 100,000 residents, except for the City of Richmond.

Most of B.C.'s cases of the coronavirus have been located in the two health authorities that serve the Lower Mainland: Fraser Health and Vancouver Coastal Health.

Elsewhere in B.C., there are a few local health areas that still have not recorded even a single confirmed case of COVID-19.

The BCCDC is quick to point out, however, that the absence of a confirmed case does not mean there is no risk to residents of a given region.

"Note that the number of cases in the (local health area) may not represent the location of exposure (e.g. people who acquired the disease while travelling or working elsewhere), and that not all COVID-19-infected individuals are tested and reported," the map warns. "The virus may be circulating undetected in the community, including in areas where no cases have been identified by public health."

Though the vast majority of B.C.'s COVID-19 cases have been located in the Lower Mainland, health authorities outside the region have also dealt with their own hotspots. The updated map shows at least one local health area within each health authority that has recorded more than 200 cases of COVID-19 per 100,000 residents.