Sunset Beach will take 6 weeks to restore after 4/20 rally: park board 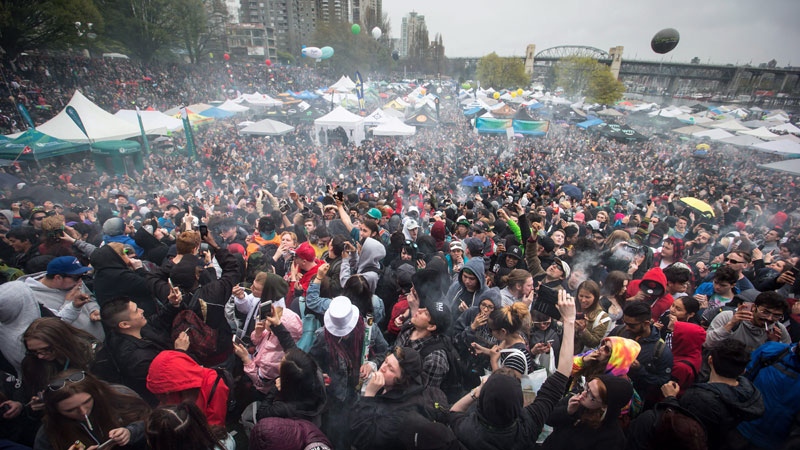 A cloud of smoke hangs over the crowd as thousands of people smoke marijuana during the 4-20 annual marijuana celebration, in Vancouver, B.C., on Friday April 20, 2018. (THE CANADIAN PRESS/Darryl Dyck)

The City of Vancouver says part of Sunset Beach Park will be closed for six weeks--a month less than originally anticipated--as crews work to "rehabilitate" the lawn after Friday's 4/20 rally.

"Park Board and City staff worked together all night after 4/20 to clean event debris on the field, but there were still objects such as glass and discarded edibles on the field that posed a danger to the public," the board said in a statement.

According to the release, the field has been fenced off to ensure public safety, especially for children and dogs.

Crews will have to let the lawn dry and make sure all debris, including cigarette butts, metal and glass are removed. Then, they’ll aerate the field before spreading fresh soil and seeds.

The board said it will tally the cost of the restoration and bill those behind the pro-cannabis event.

Organizers, however, say 4/20 crowds left the field in no worse a condition than they found it in.

On Saturday, cannabis activist Jodie Emery posted photos to Twitter of the grass on April 14 and April 21, a day after the event, highlighting the similarities in the lawn's condition between the two dates.

"No damage. No need for fencing. No destruction. Just the same green grass — and no mud pit, because of our $30,000 investment in ground covering," she wrote.

"Shame on the (Park Board) in (Vancouver) for destroying the public access & use of Sunset Beach Park — they’re closing it off for 10 weeks because of... mud?"

But Vancouver's director of parks, Howard Normann, said the event has sped up the normal wear and tear on the grass and caused significant damage that can't be seen on the lawn's surface.

He said the weight of the large crowds "trampling" over the field has compacted the soil, making it more difficult for the grass to access the air and nutrients it needs to stay healthy.

"There's no way you could put 40,000 people on small sports field and expect it to be the same," he told CTV News Monday.

Some 40,000 people descended on the popular West End beach Friday for what might have been the last 4/20 before recreational marijuana is legalized in Canada.

The next day, the board gave an initial estimate of about 10 weeks for restoration work, but set a new timeline Monday, saying it hopes to reopen the field in early June.

4/20 organizers did pay $30,000 worth of plastic turf installed around the main stage to help mitigate the damage, the park board said.

Last year, the field was closed for 10 weeks and the event came under fire for leaving a $245,000 bill for cleanup, policing and re-seeding a trampled lawn.

Vancouver 4/20 rallies continue to be held at Sunset Beach without a permit from the city.

"The Park Board will continue to work with partners at the City to encourage organizers to find a more suitable, alternate location for the event in future years," the board said.

Here are people using the park today — before @ParkBoard put up unnecessary & expensive fences that will now prevent people from using our park. Why? pic.twitter.com/JueafysoC7