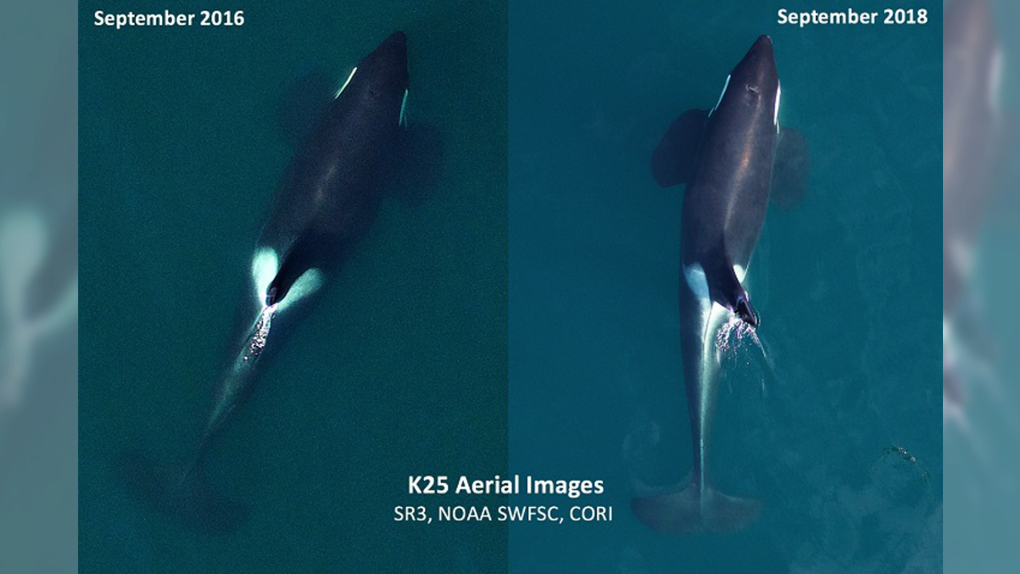 K25 is seen in a combination photo supplied by NOAA.

Another southern resident killer whale appears to be sick, researchers say, but several other orcas appear to be pregnant.

NOAA said the weight loss likely "reflects the challenges he faces without her help in capturing and sharing prey."

Males rely on help from family members, and long-term demographic studies have shown they have increased mortality rates following the death of their mothers.

They said K25 is not in as dire a situation as that of J50, a sick whale who researchers believe died earlier this month.

But NOAA's news wasn't all bad. Aerial images collected this week also showed K27 is heavily pregnant, and she's not the only one.

A number of females in the J, K and L pods all show signs of pregnancy, NOAA said.

There are concerns, however, as there is currently a high rate of reproductive failure among the southern residents, and K27 is believed to have miscarried two years ago.

The Center for Whale Research will monitor the pregnancies of the extremely endangered southern residents.

In the meantime, researchers are asking boaters to give the vulnerable whales extra space on the water so they can hunt for food undisturbed.

The federal fisheries minister is also keeping an eye on the whale population as the Liberals try to move forward with the Trans Mountain pipeline expansion.

Speaking in Ottawa Tuesday, Jonathan Wilkinson said it will be more difficult to green light the project if the National Energy Board's new review finds an increased supply being sent through the pipeline between Alberta and B.C. would put killer whales at risk.

He said such a finding wouldn't mean cabinet would reject the twinning completely, but that the federal government would have to be convinced the species is being protected.

"Cabinet has to consider that very seriously, but it has to then be convinced that we've done the appropriate things to actually more than mitigate the impact of the shipping traffic," Wilkinson said.

He said shipping lanes were moved and speed limits lowered in effort to protect the whales' habitats, but he acknowledged that further protections may be possible pending review.