Someone is building intricate miniature versions of Vancouver landmarks 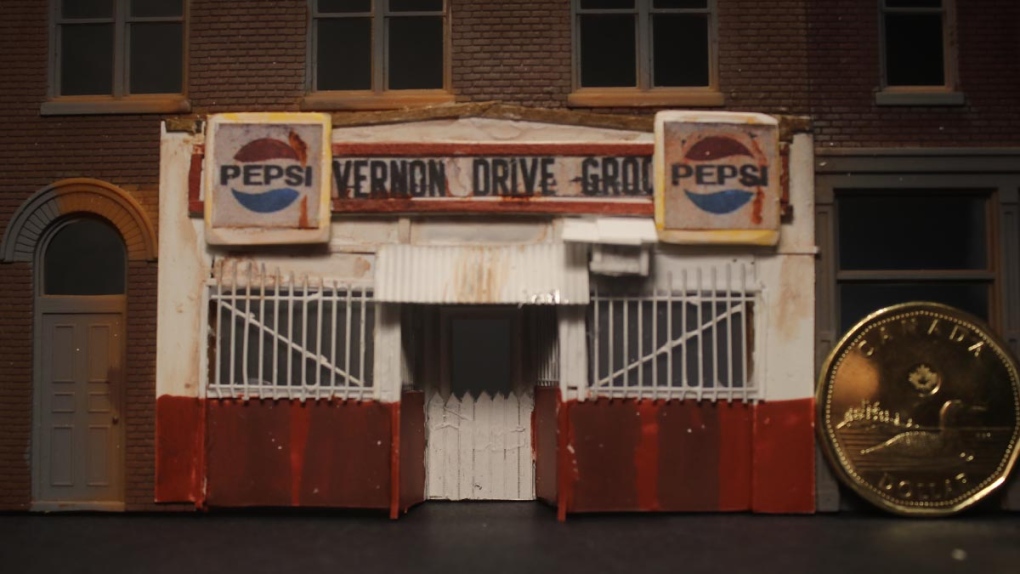 Michael Soganic, 35, is building model-sized replicas of a number of iconic Vancouver buildings.

VANCOUVER -- There are certain Vancouver buildings that are immediately recognizable to longtime residents. Michael Soganic has a couple of them sitting in his living room.

The 35-year-old corporate trainer is currently building a series of intricate miniatures based on Vancouver landmarks, including the iconic Vernon Drive Grocery – a property that's been described as one of the most-photographed stores in the entire city.

The attention to detail is impressive, especially considering the buildings are only a couple of inches tall.

Using a mix of store-bought and homemade modelling components, Soganic is picking up a hobby that first piqued his interest as a kid, when he started building model airplanes and tanks from kits.

"About two years ago I got back into it," he said. "I made about a dozen tanks and airplanes and things, but they get a little repetitive after a while."

Soganic said what he'd really love is to build a basement-sized model train city – like one British rocker Rod Stewart recently unveiled to the world – but finding that much space as a millennial living in Vancouver just isn't in the cards right now.

Instead, he's decided to start smaller with a tribute to some of Vancouver's most beloved buildings, stores and venues, such as Little Mountain Gallery. His ultimate goal is to join them together on a single fictional street – a love letter to the city he's called home for the last decade.

Looks like the awesomest comedy venue in Vancouver might be getting bulldozed. In a weird coincidence I started making this part of a diorama the day before the rezoning application was released. @littlemountaingallery @rossdauk

That could be anywhere from a month to six months away, he said, depending on how much he decides to fuss over the little details.

While Soganic is eyeballing the real-world buildings he's using for inspiration, as opposed to breaking out a measuring tape for precise scaling, there's still a lot of work that goes into building miniatures.

"It's multi-disciplinary," he said. "You do a little carpentry, you work with electronics, you do the painting."

One of the keys to building a convincing miniature is making sure the building looks appropriately weathered. Soganic said that's one of the techniques he's learned spending hundreds of hours watching YouTube tutorials.

He's already previewed the final results on his Instagram page and on Reddit, where the response has been overwhelmingly positive. A recent post he shared of a miniature Vancouver special prompted a wave of jokes about the city's pricey real estate.

"I still can't afford this," one commenter wrote.

While some people might scoff at his hobby, Soganic said when people see miniatures up close it's hard to deny their charm. That's part of the reason he's been sharing his progress online.

"I'm trying to make model trains cool again," he said. "I think more people are into it, but they don't know they're into it."