The threat was written anonymously in three bathroom stalls.

“I’m gonna shoot the school down Dec. 13 be ready,” read one note, signed only with the initials A.G.

“I went into the bathroom and I saw on the box of the bathroom it was written on the top,” said Isabel Hernandez, an international student in Grade 11.

Hernandez said she told a friend, who reported the threat to the school's principal.

School District 42 told CTV News the threats were general in nature and did not target an individual student or staff member.

“We haven’t been able to rule out that is not credible. So we are taking this extremely seriously and the Ridge Meadows RCMP are investigating,” said district spokesperson Irena Pochop.

Westview Secondary sent out an email to parents on Thursday to explain the situation.

“I understand that’s threats of any kind can cause significant and unnecessary worry for families,” Darren Rowell wrote in the notice.

The district’s Safe and Caring School team and the provincial Safer Schools Together team have been notified and are working with school staff.

RCMP officers were deployed to the school on Friday out of “an abundance of caution.”

“We take all threats even if they’re intended as a prank extremely seriously and the disciplinary consequences can also be very serious. They can include criminal charges,” said Pochop. 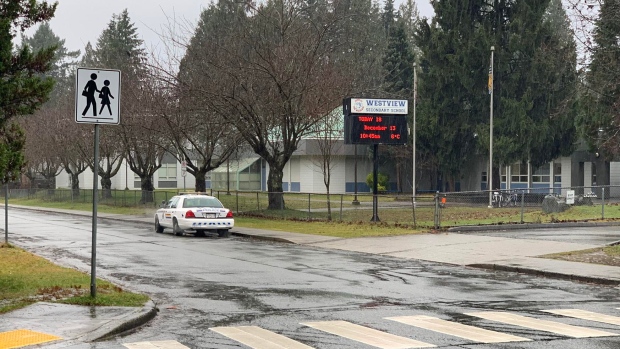 “A lot (parents) have kept their kids home today. My first class there was four people including me in that class and usually there’s like 30," said Matthew Makela, a Grade 10 student.

The district said only 120 of the 800 students enrolled showed up to school Friday.

As a result, regular classes were cancelled.

Experts say the fear parents are expressing on social media is partly a result of the actual attacks taking place at schools south of the border.

“The problem is significant in the United States, but we’re not immune here in Canada. We have our own history of school shootings,” said Brenda Morrison, a Criminology Professor at SFU.

She’s been studying school shootings for the last 20 years and believes many of the people behind these kinds of threats share the same story.

“There’s some sense of disconnection and marginalization that is happening for them,” explained Morrison.

She’s praising the work of the school and the RCMP saying that a threat of any kind can be a sign of a cry for help.

Makela said he wasn’t scared that the perpetrator would follow through on the threat.

“I knew it wasn’t gonna happen because if you’re really gonna shoot up a school you wouldn’t leave a note saying that you would,” said Makela.

He believes the notes were just a prank.

“If that’s the case, that’s pretty stupid. I mean you caused all this, you caused the police to come, wasting their time.”

RCMP haven’t said if the person responsible has been caught or commented on a possible motive.

Police are also investigating a threat made against a student at nearby Samuel Robertson Technical on social media.

The two incidents are not believed to be connected.

Investigators have asked anyone with information about either case to come forward.