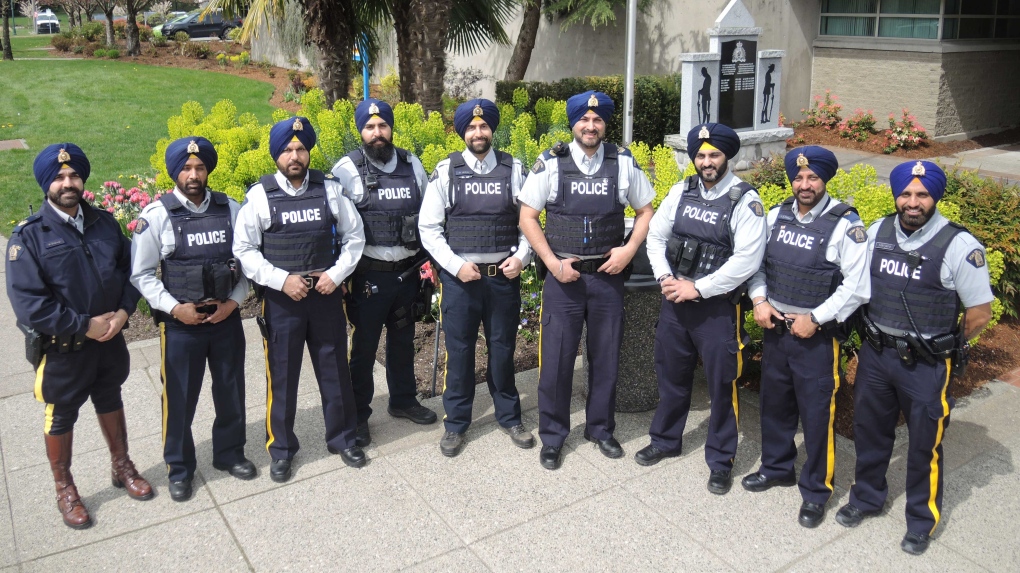 Sikh members of the Surrey RCMP are seen in this image the detachment tweeted in 2019. (Surrey RCMP)

VANCOUVER -- In the face of intense criticism, including from the prime minister and a Sikh advocacy group, the RCMP is backing down from a controversial policy that relegated front-line Mounties with heavy beards to desk duty and other non-critical roles.

CTV News first reported on the issue one week ago, when the World Sikh Organization and retired West Vancouver Police Chief, Kash Heed, revealed officers with religious exemptions to wear beards had been involuntarily reassigned after RCMP management insisted their facial hair was incompatible with approved face masks during the pandemic, which hasn’t been an issue in any other police jurisdiction in Canada.

A day later, the public safety ministry and Prime Minister Justin Trudeau urged the force to find a timely solution — even though front-line workers have been trying to quietly find a reasonable solution since March 31.

Now, the RCMP is letting them go back to work, but only if they’ll be in situations with low risk of exposure to COVID-19.

“Impacted bearded members across Canada may return to operational duties wearing the appropriate PPE assigned to them based on a risk assessment carried out by the Commanding Officers in their respective provinces,” reads a press release attributed to Gail Johnson, chief human resources officer of the RCMP.

“Calls for service will be triaged from call centres, with bearded members being assigned to respond operationally only if the risk of exposure is low or multiple responding officers will be present. At no time will we accept putting our officers or the public at any undue risk. The decision to return to active operational duty is based on the risk assessment carried out by the Commanding Officer however, the decision to return to operational duties will always rest with the affected members.”

CTV News has obtained an internal memo to officers in B.C. Thursday morning from the commanding officer of E-Division.

"I regret and understand the frustration that caused," wrote Deputy Commissioner Jennifer Strachan. "The decision to reassign you was out of concern for your safety and in no way meant to hinder the ability of our members to do their job. The health and safety of all employees will always be a top priority."

The World Sikh Organization, based out of Toronto, is pleased at the reconsideration.

“I'm relieved that the affected Sikh RCMP officers finally have some good news. It's been a long six months and there was an increasing feeling of hopelessness,” said the group’s legal counsel, Balpreet Singh.

“I personally feel that this entire situation should not have dragged as long as it did given that other forces arrived at a solution for Sikh officers fairly quickly. This was a clear example of systemic discrimination in the RCMP and I hope the RCMP takes this as an opportunity to address that larger issue.”

The RCMP says it's still working on finding an appropriate mask that meets Canada Labour Code requirements, even though health officials haven’t publicly stated that police officers need medical-grade respirators to do their jobs.

“We have also begun work with Innovations Solutions Canada to explore the research and development of inclusively designed PPE and to ensure regulatory requirements support safe and non-discriminatory practices across Canada,” wrote Johnson.

“We are still working to identify or create a mask that meets our front-line needs as well as occupational health and safety regulations.”