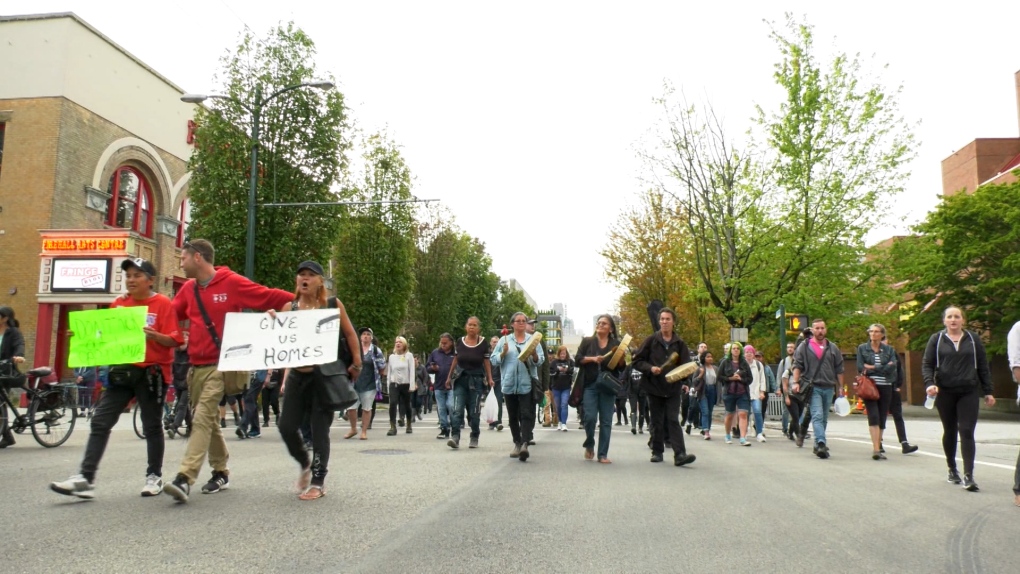 Protesters took the street on Wednesday when the deadline to move from Oppenheimer Park hit.

As the moving day deadline loomed for residents of Oppenheimer Park, protesters took to nearby streets.

Carrying signs that had messages like "give us homes," and "hands off Oppenheimer," dozens chanted "don't touch Oppenheimer" while marching down Cordova Street.

The park's residents were supposed to clear out by 6 p.m. Wednesday after being issued an order from the city on Monday, but some are still on site.

An estimated 100 to 200 people have been calling Oppenheimer Park home.

As of Thursday, 93 people had accepted other housing officers, the city said.

It estimates the number represents more than two-thirds of those who were living in the park when the order was served.

There has been a visible police presence in the park since notices were passed out, but the Vancouver Police Department says its officers would not forcibly remove people from the park at this time.

The city says it is exploring other legal options to compel people who don't want to go to leave the park.

Officers are monitoring the park to keep the peace and will respond to incidents as needed, but will not remove campers without further legal authorization and notice.

However, housing advocates have also been in the park for several days and have expressed concerns there is not enough shelter available for all park residents, meaning some will have nowhere to go.

"We're very concerned about what's going to happen with people who are not being offered housing … we're sure there's going to be people who are left without housing," said Fiona York of the Carnegie Community Action Project.

"We haven't been given a clear answer about what the next steps are. We've been told that … likely there will be something further, there will be an injunction or some other effort to have people dispersed from the park."

The city said it had located about 140 units of housing where campers could stay, including recently renovated single-room occupancy (SRO) options, and there are additional shelter spaces available as well.

Those who've been living in the park have had access to supports and to people who will help them pack and move their belongings.

They were also given the option to put some items in storage temporarily. Anyone who takes the park board up on that offer will be given a card with details on how their belongings can be returned.

Those items will only be stored for up to 60 days, the city said.

"The City and Park Board will only dispose the unwanted belongings of people who have accepted housing or that have clearly been abandoned in the park," the city said in a statement.

However, items that present hazards to health and safety will be removed in compliance with an order from the fire chief.

Empty or abandoned tents are being moved to the edge of the park to make room for renovations to the field, the city said.

Previously, officials said the order issued by Vancouver's general manager was in response to concerns about health and safety, and because other housing options had been secured.

York said that Oppenheimer Park is often seen as the "last stand" for those who have been told to move on from other locations where they've been camping.

"People are a little bit safer being all together rather than out on the street or under a bridge or in an alley."