A local boater was treated to some unexpected company during a recent sailing trip.

Alex Millar posted a video to YouTube Monday of his encounter, which occurred while he was boating between the University of British Columbia and Bowen Island.

He suddenly found himself surrounded by a pod of porpoises.

The cetaceans, which he identified thanks to Reddit users as Dall's porpoises, kept surfacing on both sides of his boat during the journey.

Dall's porpoises grow to a maximum length of 2.2 metres, and are identifiable by their black bodies and white patches on their lower flanks. They have small, triangular dorsal fins which are black at the base and white at the tip.

They can be recognized by the "rooster tail"-type spray they create when they surface while swimming, as seen in Millar's video.

The species is often confused with the harbour porpoise or thought to be baby orcas, according to the B.C. Cetacean Sightings Network, a joint collaboration between Ocean Wise's Coastal Ocean Research Institute and Fisheries and Oceans Canada.

They typically travel in groups of two to 10, the network says, and are the fastest cetaceans swimming in B.C.'s waters, reaching speeds as high as 55 km/h.  While they generally prefer cooler, deeper waters, they are often spotted in deeper areas of the Salish Sea. 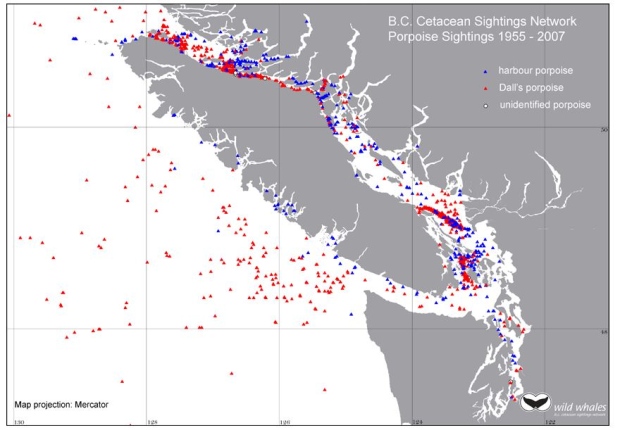 The species is only found in the north Pacific Ocean and adjacent areas. They eat mostly small schooling fish and cephalopods such as squid, but they will occasionally eat crabs and shrimp.

They are not considered to be at risk in B.C. Off the North American coastline, their greatest threats are fishing nets like those used for salmon.

About 18,000 are killed each year as a source for meat during Japanese hunting season, the U.S. National Oceanic and Atmospheric Administration says. Pollutants and other contaminants have also been known to cause death and affect their ability to reproduce.